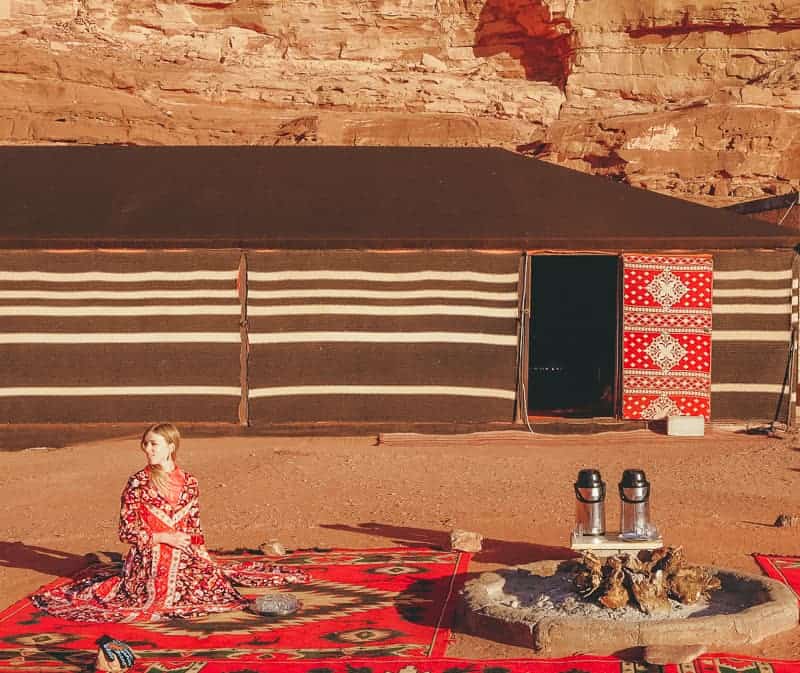 Regarded as being a haven in a region full of conflict, Jordan is today one of the safest countries to visit in the Middle East. Bordering Israel, Syria, Iraq, and Saudi Arabia, Jordan has a tradition of welcoming visitors dating back to camel caravans that brought frankincense and spices along the King’s Highway from southern Arabia.

Nabataean merchants, Roman legionnaires, Christian crusaders, and Ottoman armies have left their mark on this desert landscape, making it an extraordinary place for the intrepid traveler.

Good to know before traveling to Jordan

Power voltage and socket type(s): Power plugs and sockets are of type C, D, F, G and J. The standard voltage is 230 V.

Most Famous Places in Jordan

Unlike anywhere else on the planet, Petra’s spectacular Nabataean sandstone city is a UNESCO World Heritage Site that needs little introduction. Constructed in the 3rd century BC Petra is a must-see attraction during any visit to Jordan. – Buy tickets in advance here

Perched atop the highest hill in Amman at 850 meters (2,788ft) is the Temple of Hercules and the Umayyad Palace. Built during the reign of Roman Emperor Marcus Aurelius (AD 161–80), all that is left of the temple are three giant pillars, and a stone carved hand. Yet despite not much being left, it is hard not to picture the magnificence of how it must once have looked. – Check all tours in Amman here

Easily reached from the capital Amman the ancient Roman city of Jerash is one of the best-preserved Roman sites in the world. Visiting Jerash will give you an insight into what life was like in the Roman Empire. – Check tours here

While it might soon like something you don’t want to do floating in the Dead Sea is a must during any visit to Jordan. Ten times saltier than normal seawater, the Dead Sea allows you to swim in the world’s deepest hypersaline lake effortlessly. – Check Dead Sea tours here

Jordan has accommodation types to suit all budgets from a Beduin tent in the desert to a five-star luxury hotel in Amman.

Unless you plan a Red Sea beach or diving holiday in the Gulf of Aqaba, the best place to stay is in the capital Amman. It is easy to rent a car or organize trips to Petra, Wadi Rum and the Dead Sea from Amman.

It used to be that Amman’s budget accommodation was aimed at transient workers and truck drivers and was not of a standard acceptable to most western tourists.

This has now changed with many hostels popping up that offer shared dormitory-style accommodation starting from $10 per night.

Unlike many countries where mid-range hotels are part of a chain, most 3-star hotels in Amman are family-run affairs where you can get a real taste for Jordanian hospitality.

Favorites include the Crystal Hotel, Larsa Hotel and the Celino Suites Hotel with all three of these hotels breakfast is included in the price.

Another option for mid-range accommodation is to rent an apartment on Airbnb. Suppose you are traveling as a family or as a group of friends. In that case, Airbnb offers considerable savings over a hotel and allows you the opportunity to cook for yourself rather than eat out all the time.  – Check the best Airbnbs in Jordan here

Paris has the George V, London the Ritz, and Amman has the St. Regis Amman, a 5-star property offering every service you would expect to find in a top-end hotel. – Check rates here

Another hotel I really like and one that would prove popular with the kids because of its swimming pool is the Amman Marriott Hotel, a city center gem of a hotel that even has an American themed sports bar. – Check rates here

When visiting the desert, plan to spend at least one night camping out in a Beduin tent under the stars. With no light pollution, stargazing in the desert is a unique experience that you will remember forever.

Tip: Try and visit during the Perseids meteor shower in August or the Orionids in October.

Do I need a visa to travel to Jordan?

Fast-Track: Get your Jordan Visa in advance

The simple answer here is yes, but obtaining a visa is very easy for most people and can be done on arrival at your port of entry. Suppose you happen to have a non-western passport (Europe or North America and Australasia).

You may need to obtain a visa from the Jordanian embassy in your home country. For others, a visa is issued upon arrival and currently costs 40J ($56) for a single entry with one-month validity. Remember to have at least six months remaining on your passport and a clean page for the visa.

Despite being a relatively small country, Jordan experiences four distinct seasons – spring, summer, autumn, and winter. The summer months can be particularly hot with daytime temperatures as high as 32°C (89.6°F) low-lying areas such as the Jordan Valley, and Gulf of Aqaba can be warmer.

Jordan receives most of its rainfall between December and March and can be unusually cold, dropping to sub-zero in the desert. This leaves spring and autumn as being the best months to visit Jordan.

Tip: If you want to combine a beach holiday with some sightseeing, visit Aqaba for some early summer sun in April and May.

If you plan to spend time in Amman, forget about trying to understand bus routes and stick to private taxis.

Taxis are relatively inexpensive compared to what you might be used to paying, and you can always negotiate a deal with the driver if you need him to wait for you.

For airport transfers, I always book mine ahead with Kiwi Taxi in order to avoid scams. – Check rates here

All taxis in Amman calculate fares using a taximeter, but you can still negotiate with the driver before getting into the cab.

I only recommend a car when driving between cities. I traveled through all Jordan during a 10-day road trip and I loved the experience. However, you should love to drive since distances can be long. I found the best car deals with Discover Car. – Check rates here

All major tourist sites have tours that you can book from your hotel, including the Beduin desert camping that I recommend.

How to get to Jordan

Royal Jordanian and Jordan Aviation offer several daily flights between Amman and Aqaba, with the 45-minute trip being the only domestic flight in Jordan.

When trying to enter Jordan by road from Isreal and other neighboring counties, you can save yourself a lot of hassle and time by already having a Jordanian visa issued from the embassy in your home country.

Driving in Jordan is considered safe, and all the signposts are written in Arabic and English. – Check car rentals here

How to get around in Jordan

As I have already said, driving in Jordan is relatively easy but can be a headache in Amman due to congestion.

Forget about public transport and stick to taxis; they are not all that costly and very convenient.

When it comes to visiting places like Petra and Wadi Rum, you can book excursions through GetYourGuide. – Check the best tours here

Food in Jordan is an excellent immersion in the country’s rich and varied past. A mix of Bedouin flavors and the Levant’s most iconic dishes take on a distinctly local character that makes sampling Jordans cuisine part of the adventure.

Best Things to do in Jordan for Outdoor travelers

If there is one thing you need to see while in Jordan, it has to be Petra. Dating to around 300 B.C., Petra was the Nabatean Kingdom’s capital and home to one of the most gifted peoples of the ancient world. Words cannot describe the beauty of the carvings in the sandstone cliffs that they constructed to impress their trading partners. – Check tours here

Spend a day or two at Wadi Rum and get your adventure on! Meaning ” High Valley” in Arabic, Wadi Rum offers a unique desert landscape with towering sandstone mountains and star-filled nights.

Spend the night camping out in a Beduin tent before taking advantage of all the outdoor activities on offer. Rock climbing, hiking, camel rides, jeep safaris, and quad treks are all available from Wadi Rum. No wonder that the area has some of the best hiking trails in Jordan. – Check all activities here

The earth’s lowest elevation on land at 430.5 meters ( 1,330 feet ) below sea level, the Dead Sea is so rich in salt that you can float without even trying.

Try and get there around 20 minutes before sunset and watch as the sun sets over Israel. Shortly after, the lights of Jerusalem come to life, adding to the magic. – Check all Dead Sea tours here

If you are still looking for accommodation in Dead Sea, you should have a look at my guide about the best places to stay near the Dead Sea.

With 27 kilometers (17 miles ) of Red Sea coastline four of which is a marine reserve, Jordan’s subtropical waters offer some of the best scuba diving to be had anywhere.

Accessed from shore or by boat, Jordan has more than 20 recognized dive sites that contain various species of coral and a myriad of fish life. Locations include wrecked ships, planes and even an American Abrams M1 tank that was scuttled in 1991.

20 Epic Top Things To Do in Jordan

20 Epic Top Things To Do in Jordan A visual guide to the best things to do in Jordan, Middle East Jordan seems to be …

Read More about 20 Epic Top Things To Do in Jordan

20 Photos That Will Make You Want Visit Jordan

p20 Photos That Will Make You Want To Visit Jordan Oh Jordan! Who would have thought that it is so easy to fall in love …

11 Lovely Things To Do in Aqaba, Jordan

Read More about 11 Lovely Things To Do in Aqaba, Jordan

10 Fabulous Things To Do in Dead Sea, Jordan and Surroundings

10 Fabulous Things To Do in Dead Sea, Jordan and Surroundings A Guide on how to visit the Jordanian Dead Sea The Dead Sea is …

Read More about 10 Fabulous Things To Do in Dead Sea, Jordan and Surroundings

8 Great Things To Do in Wadi Rum Bedouin Camp

8 Great Things To Do in Wadi Rum Camp, Jordan Discover the best Wadi Rum Camp activities and attractions in Jordan while staying at a …

Where to Stay in Jordan in 2022 – Best Hotels in Jordan

The Best Hotels in Jordan – A Guide on Where to Stay in Jordan An accommodation guide with the best places to stay in Jordan, …

20 Fun Things To Do in Amman, Jordan

Read More about 20 Fun Things To Do in Amman, Jordan

The Ultimate Jordan Itinerary: 10 Days Visit It has been a while since I discovered a new country that I haven’t visited before. I have …