Regarded as the cradle of civilization, the Middle East is a complicated land inhabited by some of the planet’s most welcoming people.

When it comes to history, the Middle East is not something you need to read about in books but can see in nearly every step you take. 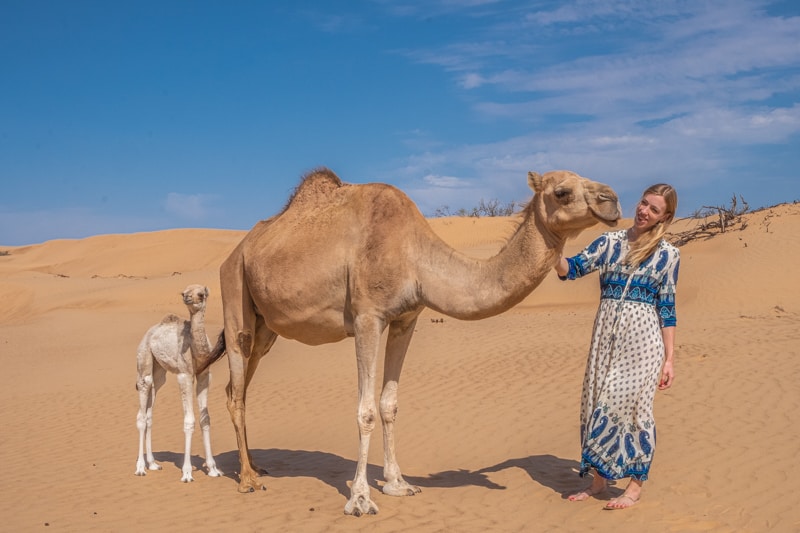 Ancient cave dwellings, pyramids, and even Roman ruins are scattered all over the landscape.

Three of the world’s great religions were born in this land Judaism, Christianity, and the Muslim faith, all having a role to play.

The Middle East is where man first learned to write and do mathematics and where perfume and coffee originated.

Middle Eastern cities read like a roll call of the world’s greatest hits with Beirut, Cairo, and Jerusalem its star attractions.

Today, the oil-rich Gulf States are pushing the region’s agenda with its global airlines and shiny new cities.

The Middle East is not without natural wonders either with everything from snow-capped mountains to deserts where Bedouins live as they have done for thousands of years.

In truth, the Middle East is an eye-opening place that everyone needs to visit at least once.

Throw away all your misconceptions and things; you might have heard and explore this mystical land for yourself.

Most famous places in the Middle East

The Pyramids of Giza

Constructed between 2550 to 2490 B.C. as tombs for the Pharaohs, Giza’s Pyramids are the only remaining seven wonders of the world. Visiting Giza allows you to explore the ancient world and wonder how such a feat of engineering could have been accomplished 4,500 years ago.

Located between the Red Sea and the Dead Sea in Jordan, Petra’s red city was built by the Nabataeans to show their wealth to other traders. Now a UNESCO World Heritage Site, Petra was once a vital part of Asia, Middle East trade routes. – Get tickets here

While not steeped in history like other Middle Eastern attractions, the Burj Khalifa in Dubai has the distinction of being the tallest building globally. Dubai is a vibrant glitzy city built on oil wealth where fast cars and luxury yachts compete for your attention.

Spend a day or two in the Lebanese capital Beirut before heading off to the Beqaa Valley, where you will discover Baalbek’s Roman ruins. Once known by its Greek name Heliopolis, Baalbek was once a thriving Roman city with nearly 83,000 inhabitants.

Nowhere else sums up the Middle East quite like Jerusalem. Now a part of Israel, Jerusalem, is one of the most important places for Christians, Muslims, and Jews.

Along with its ancient historical sites, Jerusalem is a modern city that has a thriving nightlife.

Accommodation in the Middle East

One thing you do not want to be doing while traveling around the Middle East is arriving at a destination without a place to stay. Do your research in advance and check the reviews on websites like TripAdvisor before making a booking.

On the lower end of the scale, you might want to make sure that the room you book has air-conditioning as it can get unbearably hot during the summer.

Traveling around in the Middle East can be a rather challenging undertaking, especially if you are on a budget. Other than cities like Amman, Beirut, Cairo, Damascus, and Istanbul, accommodation at the bottom end of the market is geared to the local market and not suitable for western tourists.

Generally, the hotel room price varies from country to country with Turkey and Iran, probably your best bet for an affordable place to stay. – Check prices here

Providing you are not in Israel or the Gulf region, there are some lovely mid-range family-run hotels. Often located in older buildings with a restaurant on the ground floor, mid-range hotels are quite plentiful. – Check prices here

Every Middle Eastern city has a 5-star luxury hotel with business facilities and a swimming pool. The Gulf States takes the term luxury to another level with designer toiletries and pampered service. While finding a decent budget hotel might be a problem, the spectrum’s upper end certainly won’t be. – Check prices here

Do I need a visa to travel to the Middle East?

Fast-Track: Get your Visa in advance

Yes and no, but for the most part, yes! Travel regulations and visa requirements can change quite often in Middle Eastern countries. To combat this and ensure you will not have a problem at the border, check each country’s requirements before you travel.

Some Middle Eastern countries will issue you with a visa at the airport while others like Iran make you apply at their Embassy.

If you plan on going to Israel, ask them not to stamp your passport as an Israeli stamp may stop you from entering other Middle Eastern countries.

With its vast geographical size, the Middle East climate largely depends on what country you are in. Places like Lebanon and Israel have a Mediterranean climate similar to Southern Spain or Greece.

The Gulf States being much further south, have mild winters with scorching hot summers.

Overall, the best time for tourists to travel to the Middle East is during the summer months in Israel, Lebanon, Jordan, Oman, and Turkey, While Egypt and the Gulf States are best visited during the spring.

Transportation in the Middle East

How to get to The Middle East

Flight: Every Middle Eastern capital has an international airport with Dubai, a popular stopover for people traveling between Europe and Asia. – Check flights here

Train: Trains are non-existent, but you can get to Istanbul by train and then take the once-weekly train to Tehran.

Car: Cars are a great way to travel around once you are in a country, but due to strict border controls, it is easier to fly than to drive from one country to another. – Check car rentals here

How to get around in the Middle East

Car: – Generally speaking, the car is king in Middle Eastern countries and is the most popular way of getting around. – Discover car rentals here

Public Transport: Dealing with the language and signs being in Arabic or Farsi other than in Israel, you are better off giving buses a miss. Taxis are everywhere you look, and depending on the country can be inexpensive.

Best Food in the Middle East

You won’t find Pork in Middle Eastern food but plenty of chicken, lamb, and fish. If you stay away from fancy restaurants, eating out can be relatively inexpensive, with the average lunch price between $10 and $15.

If you are on a budget street food like Shawarma and Falafel is inexpensive. In the Gulf, where prices tend to be higher, visit the big shopping malls’ food courts.

Typical food in the Middle East:

Best Things to do in the Middle for Outdoor travelers

Located on Mount Lebanon around an hour’s drive north of Beirut, Faraya is the Middle East’s largest ski resort with 25 chairlifts and 50 runs. Faraya is also one of the few places in the world where you can ski in the morning and swim in the sea on the same day.

Dive the Blue Hole in Egypt

Regarded as one of the Red Sea’s best dives, the Blue Hole on Egypt’s Sinai Peninsula is a 100-meter marine sinkhole teeming with sea life.

If you have always wanted to jump out of a plane but have never done it, a Tandem skydive above the Palm Jumeirah in Dubai is the ultimate aerial thrill. While strapped to a professional skydiver, you will exit the plane at 13,000 and freefall for a minute at 120 miles per hour.

The Gulf State of Oman is the home of the Ras Jinz Turtle Reserve, the largest nesting site of the endangered Green Turtle. Fiercely protected by the Omani government, you can arrange to go on an escorted tour and watch the turtles as they lay their eggs. – Check prices here

Spend the night at a Beduin camp in the desert gazing at the stars. Wadi Rum, also as the Valley of the Moon, is a magical landscape of towering red cliffs that make up the world’s most beautiful desert. Other activities at Wadi Rum include climbing, hiking, and camel rides. – Check all tours here

Regarded as one of the best whitewater rafting destinations in the world, the River Coruh passes through spectacular canyons and narrow valleys on its way to the Black Sea. Fed by melting mountain snow, the best time to tackle the Coruh’s class five rapids is during the spring.

A guide to the best trekking trails in Jordan including Petra Trail and hikes in Wadi Rum Hiking in Jordan is just awesome! It is …

20 Epic Top Things To Do in Jordan

A visual guide to the best things to do in Jordan, Middle East Jordan seems to be the new hot place to visit this year. …

Read More about 20 Epic Top Things To Do in Jordan

An accommodation guide with the best places to stay near Dead Sea, Jordan The Dead Sea in Jordan, which is only 45 minutes away from …

20 Photos That Will Make You Want Visit Jordan

Oh Jordan! Who would have thought that it is so easy to fall in love with you?! When booking my trip to this beautiful …

11 Lovely Things To Do in Aqaba, Jordan

A Guide to the best things to see in Aqaba, Jordan: A Guide with Top Aqaba Tips Are you looking to experience the unforgettable beauty …

Read More about 11 Lovely Things To Do in Aqaba, Jordan

10 Fabulous Things To Do in Dead Sea, Jordan and Surroundings

A Guide on how to visit the Jordanian Dead Sea The Dead Sea is probably one of the top highlights of every Jordan itinerary. …

Read More about 10 Fabulous Things To Do in Dead Sea, Jordan and Surroundings

8 Great Things To Do in Wadi Rum Bedouin Camp

Where to Stay in Jordan in 2023 – Best Hotels in Jordan

An accommodation guide with the best places to stay in Jordan, Middle East Jordan has been one of the most coveted travel destinations in the …

20 Fun Things To Do in Amman, Jordan

A travel guide on the best tourist attractions and what to visit in Amman, Jordan “Welcome to Jordan!” That’s how you’re greeted at every corner …

Read More about 20 Fun Things To Do in Amman, Jordan

It has been a while since I discovered a new country that I haven’t visited before. I have this habitude of returning often to the …