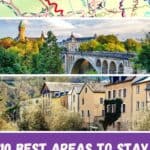 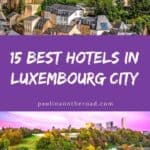 After an in-depth guide about the best hotels and where to stay in Luxembourg, the country, it’s about time to have a closer look at the capital of my beloved home country. Indeed Luxembourg City is attracting more and more visitors from all over the planet.

As the town is much more than a simple day trip from Brussels or Paris, I share with you my favorite places in case you’re wondering where to stay in Luxembourg City.

Indeed, there are plenty of new, stylish hotels in Luxembourg City that are worth to be explored. After visiting the town that’s also known as the “Gibraltar of the North”, they are the perfect place to recover and rest.

Even though hotel prices are a bit higher than in other European capitals, I found for you many cheap accommodation options in case you’re traveling on a budget. Because that’s the charm of Luxembourg City: it holds something for every type of traveler.

As a chica that’s born and bred in Luxembourg, I often get asked what are the best hotels in Luxembourg City. Are there even cheap hotels in the capital of one of the richest countries in the world?

In order to give those queries a detailed answer, I decided to write this in-depth guide on where to stay in Luxembourg City. Accommodation places are categorized location-wise and budget-wise.

Thanks to affiliate links, I pay my bills. If you make a purchase through them, I may receive a small commission at no cost to you. As an Amazon Associate I earn from qualifying purchases. All opinions are always mine. Merci!

Overview: Where to stay in Luxembourg City

Where to stay in Luxembourg City for a short stay

If you only have limited time and you’re planning to stay only 1 day or 2, I recommend staying in the old city center of the Luxembourgish capital.

Even though the best option is to stay longer in Luxembourg City as there are plenty of things to do and see, you can already get a great impression of the capital if you only stay one or two nights.

You can’t leave the capital without having seen the fortifications and at least one or two museums. The best way to explore the former city walls is by doing the famous Wenzel trail. It’s easy to walk and takes you to several scenic viewpoints.

During the afternoon I recommend visiting one of Luxembourg’s cozy bars such as Konrad or the scenic Grund neighborhood which comes with several terraces next to the river.

Where to stay in Luxembourg City for luxury travelers

Luxembourg City is a great destination in case you are fancying a luxury getaway. Why? First, because there are plenty of 4-star superior and 5-star hotels in Luxembourg that will be an ideal oasis of peace.

On top, Luxembourg City is not very large, thus you can easily explore it on foot. Is there a better way to unwind than by getting lost in scenic narrow streets?

On top, you’ll find plenty of international luxury brands in the old Upper Town. Gucci, Chanel, and Louis Vuitton are waiting for you!

Did you know that Luxembourg has one of the highest concentrations of Michelin-awarded restaurants per head?

Indeed, 4 Michelin restaurants are only awaiting you in the capital…and several more in the country! It’s without any doubt the best way to give your stay in Luxembourg an unforgettable, luxury touch.

However, even if you are traveling on a budget, you can also enjoy the beautiful capital of Luxembourg.

There’s a gorgeous Youth Hostel in the Petrusse Valley and many B&Bs, vacation homes, and Airbnbs are awaiting you. Indeed, cheap accommodation in Luxembourg City is not an impossible thing.

On top, many of the cultural events held in Luxembourg City are free and by purchasing the Luxembourg Card, you can make the most of your money.

The best way to explore Luxembourg City is by foot or public transport…which is completely free!

Where to stay in Luxembourg City for business travelers

Luxembourg City is a hub for banks, finance, and European institutions. That’s why many travel to Luxembourg for business reasons.

Luxembourg has excellent connections to Brussels, Paris, and Cologne, and as the size is quite tiny, it’s easy to do business here.

The main hubs for business, finance, and EU institutions are located in the Kirchberg district and close to Findel airport.

You’ll find plenty of business hotels in both districts. If you don’t mind being further away from the city center, I also recommend Senningerberg district as it’s really close to Luxembourg airport.

Did you know that Luxembourg City is home to several extremely cute Boutique Hotels? I love Boutique hotels for their not-so-usual design. But still, you’ll feel at home in a cozy setting.

Boutique hotels differ from large hotels by their small number of rooms. But each room is designed and decorated with great care and taste.

Most of the boutique hotels in Luxembourg City have 4 stars and are located only a short walk from the city center.

Staying in a boutique hotel is definitely a great way to give your stay in Luxembourg a unique, personalized touch.

Even though Luxembourg City is not the cheapest place to visit, you’ll still find plenty of cheap accommodation options in Luxembourg City. Think of Airbnbs, apartments, or bed and breakfasts!

Not only are they a great way to save money, but on top, you’ll mingle with the local population. In case you travel with friends or family, don’t forget to ask for group discounts!

You might also consider staying on the outskirts of the city, as apartments tend to get

cheaper with the distance from the town center.

Cheaper neighborhoods in Luxembourg City which are still close to the town center are Gare, Bonnevoie, and Rollingergrund.

What to do in Luxembourg City

As already stated, Luxembourg City is much more than a plane day trip from Brussels, Cologne or Paris. You can easily stay up to 2 nights in Luxembourg City… and there will still be things to do!

I also highly recommend visiting the country itself and not limiting your stay to the capital only. Indeed, the Grand-Duchy of Luxembourg boats fairytale castles, numerous, gorgeous hiking trails, award-winning wine industry and so much more that are worth extending your stay.

On top, it’s extremely easy to roam the country with public transport being complete since January 2020.

So what are the main reasons to visit Luxembourg City? I’d resume it under the following keywords: