I discovered a gem, that’s so close to my home country Luxembourg, that I cannot believe why it took me so long to explore it. I am talking about the Middle Rhine River Valley in Germany! Steep vineyards, legendary castles on hilltops, great food and quaint wine villages are creating a truely enchanting setting. My favorite way to explore the German Middle Rhine River is by river cruise.

Let’s sail off to the best destinations for a Rhine river day cruise in Germany!

Read more about the best castles on the Rhine

There are 2 options on how to explore the Rhine River Valley, a declared UNESCO Heritage Site since 2002, by boat: 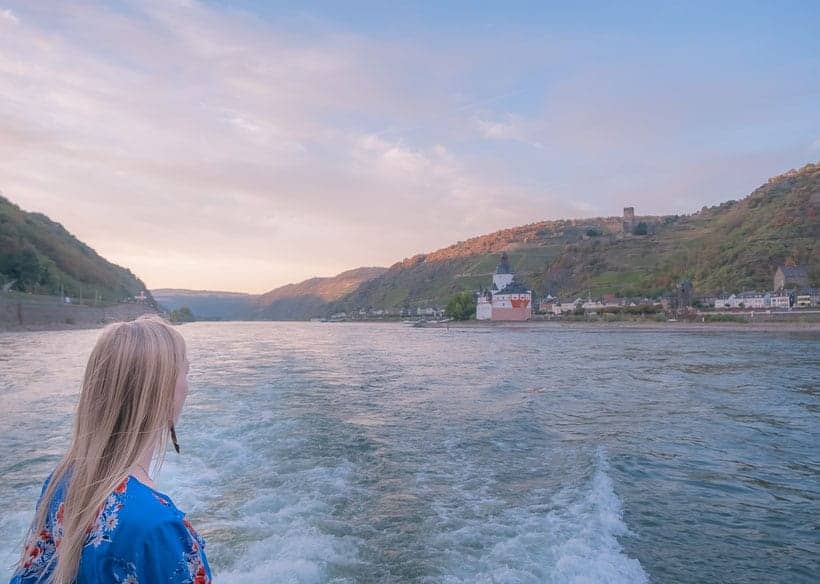 A European river cruise on the Rhine can take everything in between to 2- 8 days. You sleep on the boat and enjoy entertainment and dinner on the boat. You mostly discover the highlights of the Rhine River Valley during the day trips. Some of the most popular Rhine River Cruises are

The main difference to a Rhine Day River Cruise or tour is that you don’t have your base on the boat but in one of the quaint wine villages along the river or in a larger town like Koblenz or Rüdesheim.

My favorite route to explore the gems of the Rhine River is with the Rhine Pass from Koblenz. It gives you the freedom to visit all the villages and castles at your pace. I recommend taking the route from Koblenz to Bacharach which covers all of the highlights mentioned in this post. Your base can thus be in Koblenz or in one of the quaint wine villages like Boppard, St.Goar or Bacharach.

Buy here your Rhine Boat Pass from Koblenz to Mainz

If you want to spend more time in Koblenz I recommend the River Cruise including a Cable Car ride in Koblenz and a visit to Ehrenbreitstein Fortress.

Read more: Things To Do in Koblenz 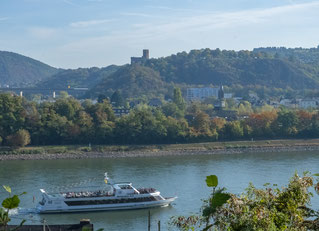 Language: German. English is widely spoken.
Currency: EUR
How to get there:

Where to stay in Middle Rhine Valley, Germany 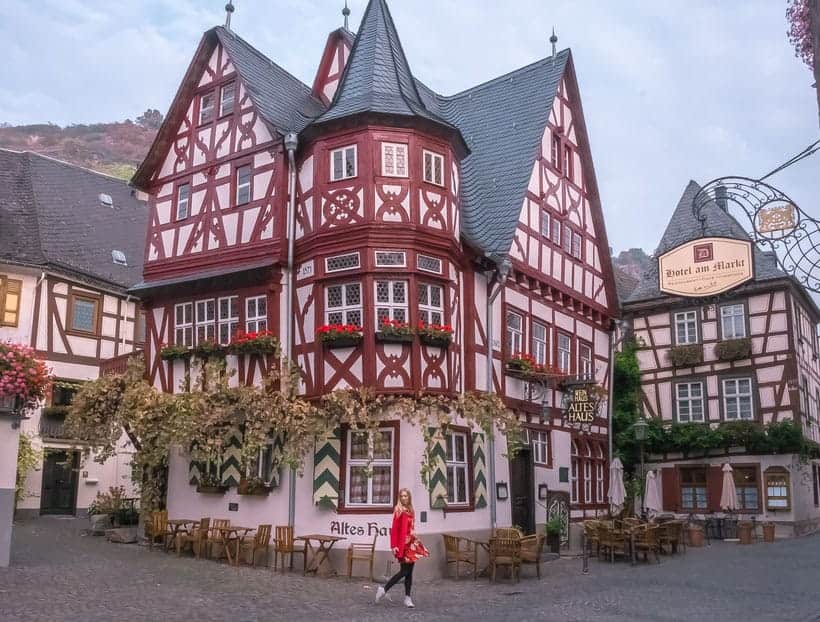 The dock is located only a few meters away from the historic town center.

Like so many towns on the Rhine, Bacharach made its money from collecting taxes from the ships passing down the river. In order to absorb the romantic, absolutely relaxing atmosphere, I recommend to start your tour at one of the medieval entrance gates, make it to “Altes Haus”, the prettiest and oldest house (1368) in town, stroll on the main street “Koblenzerstrasse” packed with wine terraces.

Take “Rosenstrasse” to your left and walk up to the Northern entrance gate, from here it’s only 5 minutes to reach the “Postenturm”, the best place for panoramic views over the Rhine river and charming Bacharach village.

I was particularly intrigued by the Gothic ruins of a massive chapel, the Wernerkapelle, which lays on the way to the castle Burg Stahleck. For me, Bacharach village is the best place to enjoy the (wine) Romantic of the Rhine river.

I highly recommend spending at 1 night in Bacharach, as the atmosphere is sublime in early mornings and at nightfall.

Where to stay in Bacharach 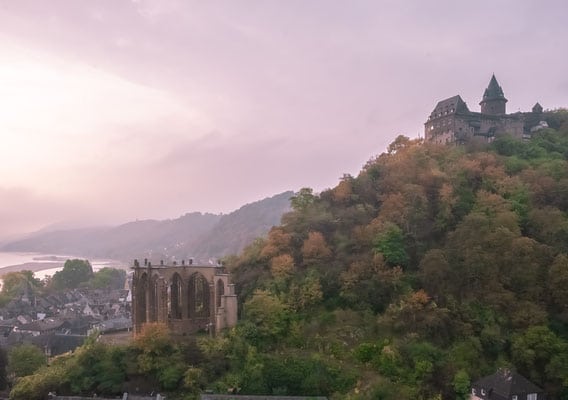 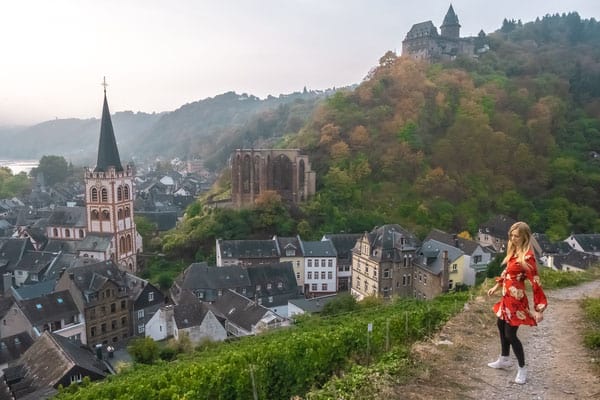 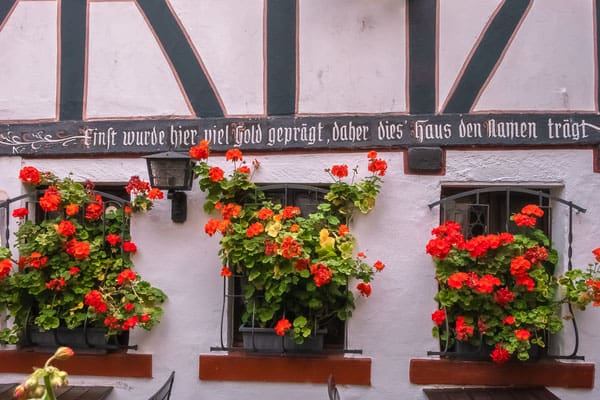 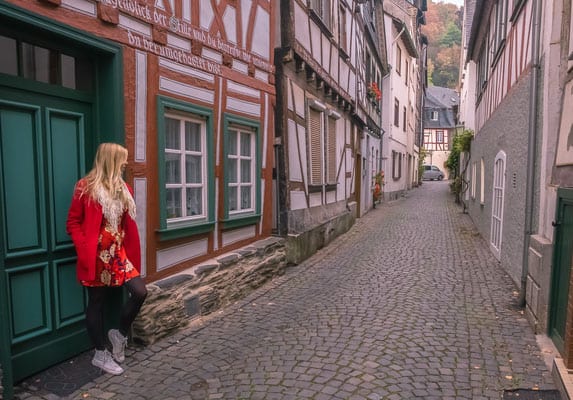 My second favorite village for a sightseeing cruise is Boppard. Winegrowing center, it is home to several prestigious Riesling wines. Viticulture in Boppard goes back to Roman times and with its 75 hectares, one of the largest wine-growing towns in the Middle Rhine.

Boppard is the perfect place to enjoy the romantic vibe of a typical Rhine village. I recommend to wander through its narrow streets and enjoy the terraces on the Rhine promenade. I also loved to explore the particularly well-maintained fortification walls.

The main sights of Boppard are the ancient Roman fortress and the Electorial Castle, one of the few castles along the Rhine River that hasn’t been destroyed. Usually, castles were built on hilltops, away from the villages.

I highly recommend to include a wine tasting in Boppard in order to enjoy the locally produced white wine. Almost every restaurant will be pleased to give you an introduction to viticulture in the Rhine River Valley. 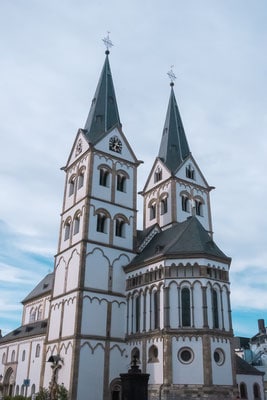 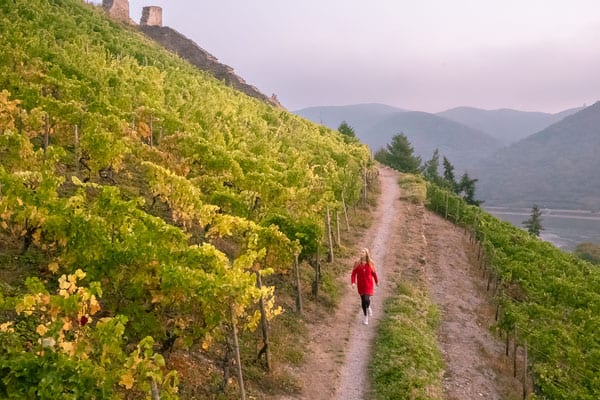 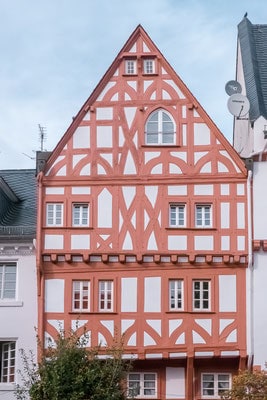 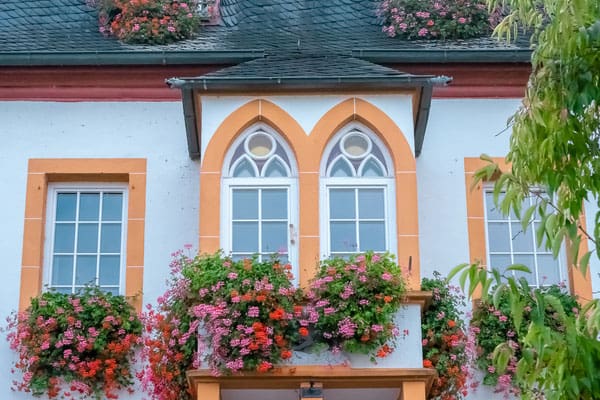 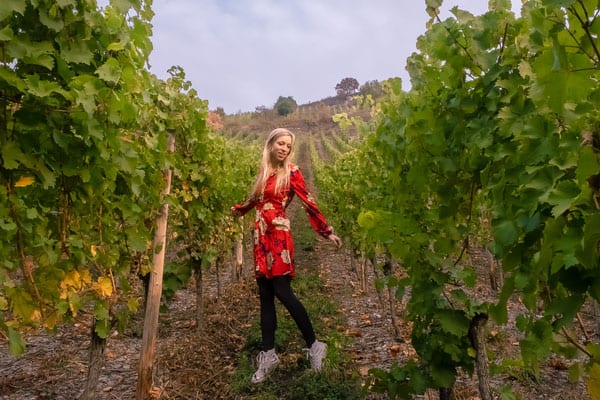 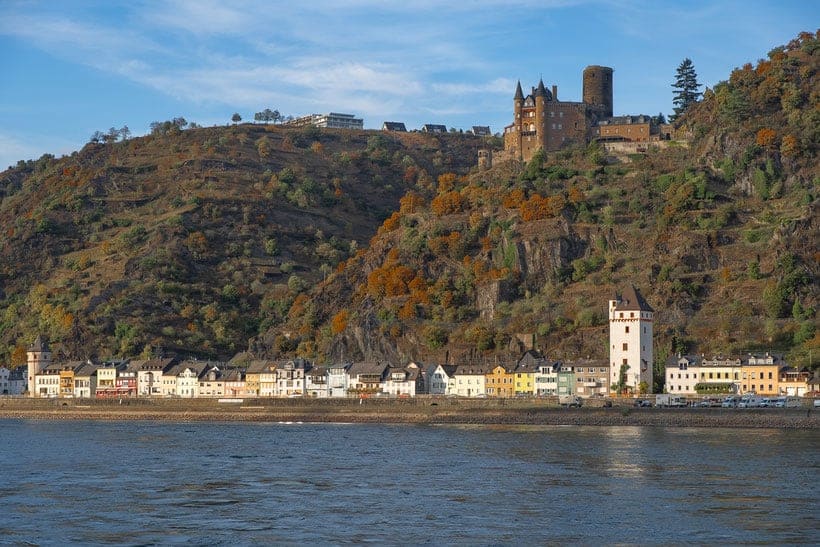 Sankt Goar is the last village before you reach the Lorelei Rock, it’s thus an extremely popular destination due to its central location in the Rhine Gorge. You can easily explore it in one day cruise from Koblenz.

The dock is only a few metres away from the historic town center.

Like other towns on the Rhine River, Sankt Goar has an impressive castle, Burg Rheinfels towering on a hilltop. The castle can be visited and you’ll enjoy a great view on the Rhine and on the sister town Sankt Goarshausen on the opposite river bank.

Sankt Goarshausen with its own castles, Maus and Burg Katz, is connected by ferry to Sankt Goar.

You’re looking for something quirky? Then the Doll and Teddy bear Museum might be for you! The museum hosts a large collection of puppets, soft toys, and puppets on over 3 floors. The items come from all over the world. (Sonnengasse 8, 56239 St. Goar, +49 6741 7270)

Did you know that Sankt Goar is home to the largest free-hanging cuckoo clock in the world? It is hanging outside a souvenir store and is about 3.5 meters high and 2 meters wide. Every hour, the little figures in the clock spin and of course, the cuckoo makes its appearance. The souvenir shop, family-run business is located on the road along the Rhine River. (Heerstr. 131, Sankt Goar 56329, +49 6741 934120) 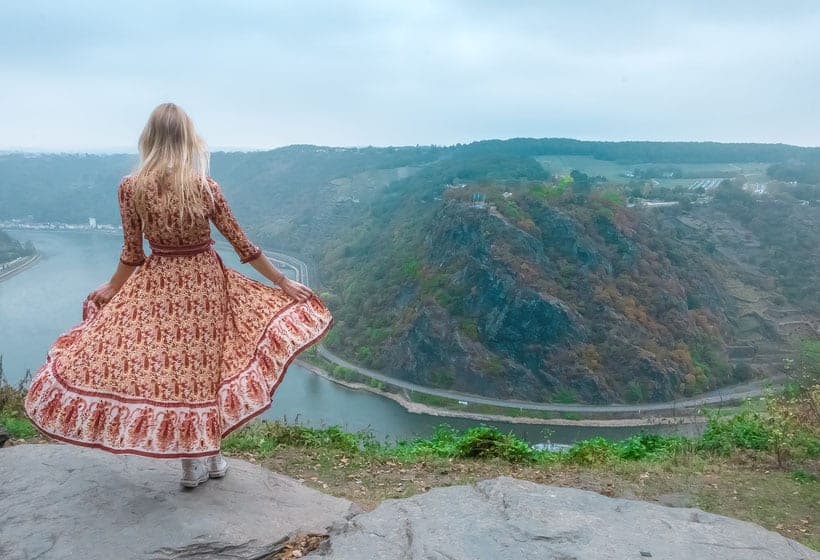 View on the Loreley

The river bend and its legendary Lorelei (or Loreley) rock are an absolute must when visiting the Middle Rhine River. 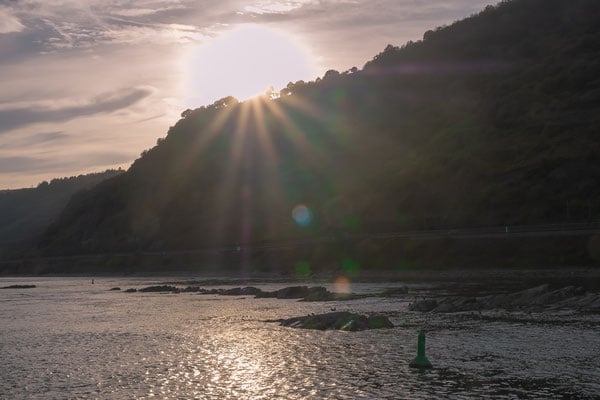 Located between the winegrowing villages of St.Goar and Oberwesel, the steep, the 194m high slate cliff is the narrowest point of the Rhine river. Shrouded in legends, this place has been depicted in countless paintings, poems, and songs. However, the most famous one is by Heinrich Heine.

The legend says that Loreley, a melancholic mermaid sits on a rock, combing her golden hair. Sailors get easily distracted by her beauty and her mesmerizing song and smash their vessels against the rocks.

Indeed the place is particularly difficult to be navigated, but there was no ship wreckage during the last decades. 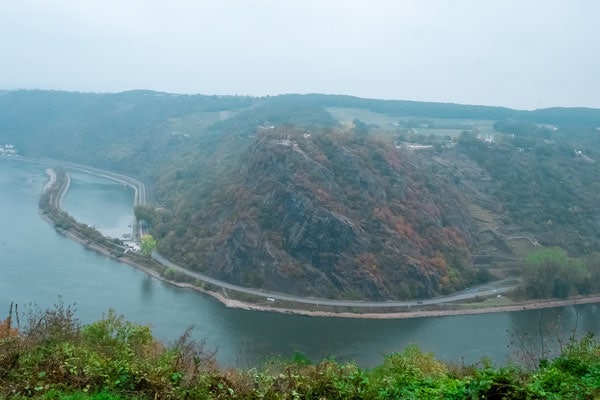 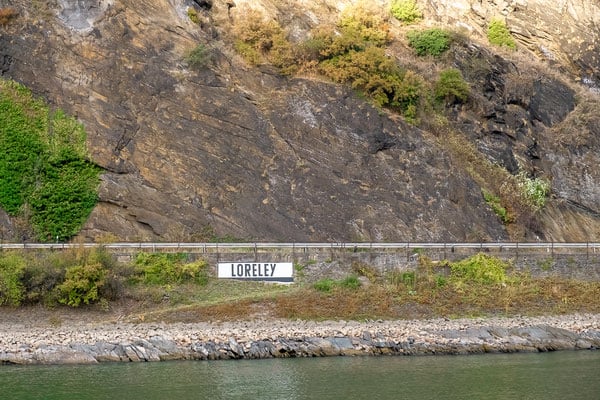 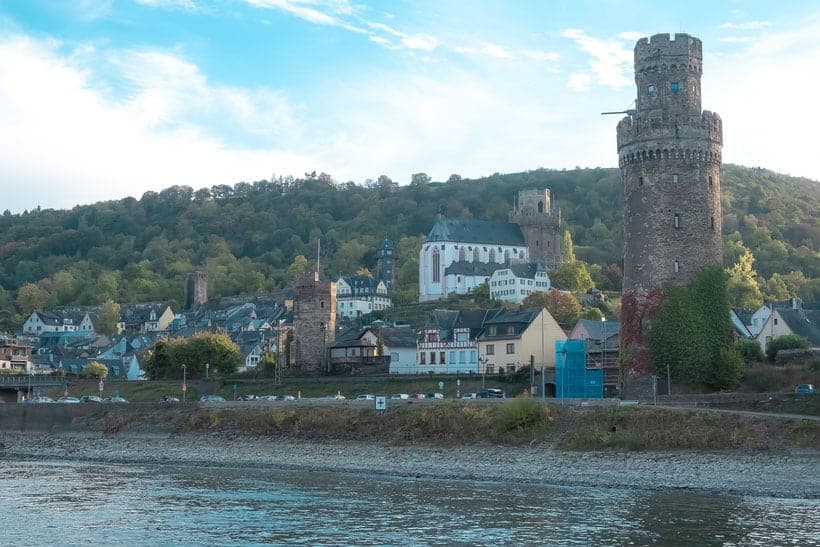 Oberwesel is the first stop on your Rhine River Day Cruise after the Lorelei Rock. Also known as the ‘City of Towers and Wine’, Oberwesel is an absolutely charming place to visit due to its old city wall, the picturesque old half-timbered houses and the ancient ruin Schönburg.

Oberwesel has the oldest, largest and best-preserved city fortifications on the Middle Rhine. Of the original 22 towers of the city fortifications, 16 are still preserved today. The “ox tower” is the most famous one. The town also used to count up to nine monasteries.

Oberwesel is also the perfect departure point to hike up to Maria Ruh will from which you’ll enjoy panoramic views on the Lorelei cliff. Just follow the RheinburgenWeg signage and you’ll reach the hill in 1h30. The hike is medium-difficult and includes climbing parts. 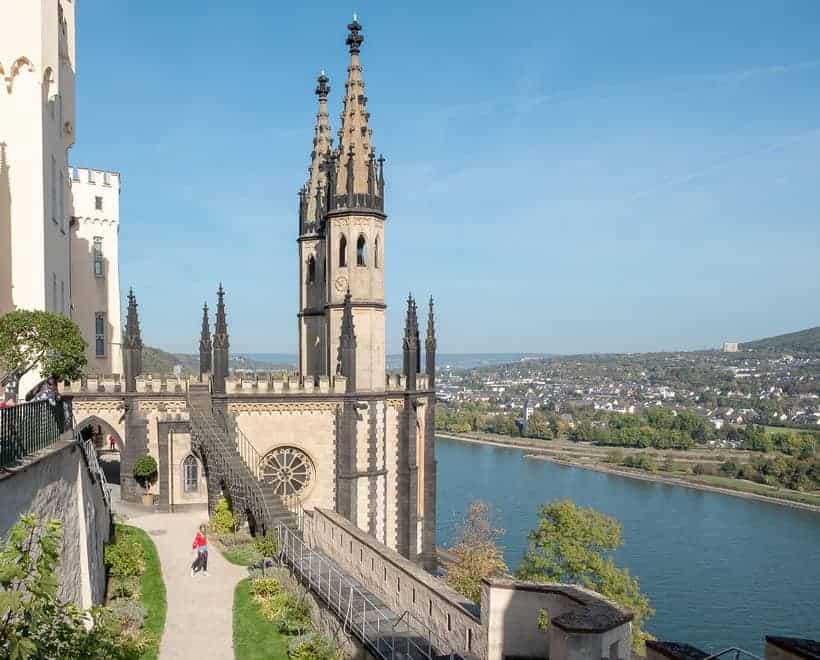 You’ll be spoilt for choice when it comes to castle hooping on the Middle Rhine River, but I highly recommend to visit Stolzenberg Castle, probably the epitome of Rhine romantic.

Located at only 10 minutes by car from the city center of Koblenz, Schloss Stolzenfels towers on the left river bank and offers dramatic views on the Rhine and backcountry.

Built in the 19th century on top of medieval ruins, Stolzenfels castle is one of the prettiest castles on the Rhine river thanks to its park, artwork and fanciful, majestic exterior. Prussian Crown Prince Friedrich Wilhelm rebuilt the castle in a Gothic Revival style and it opened again in 1842. The prince even opened up the castle to foreign visitors, something very unusual at that time. 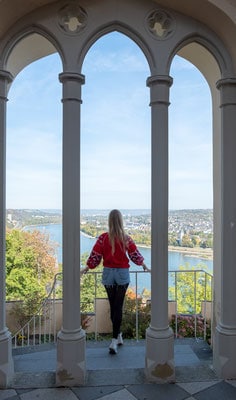 The setting of Stolzenfels castle is absolutely enchanting: the pergola garden reminded me of Andalusian palaces and the castle chapel’s towers in front of the Rhine create a magical postcard motive.

Opening hours vary with the seasons and tickets cost ~5€. You can reach the castle by foot from Stolzenfels village. 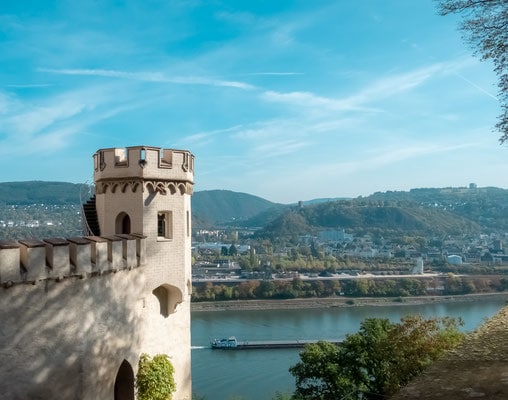 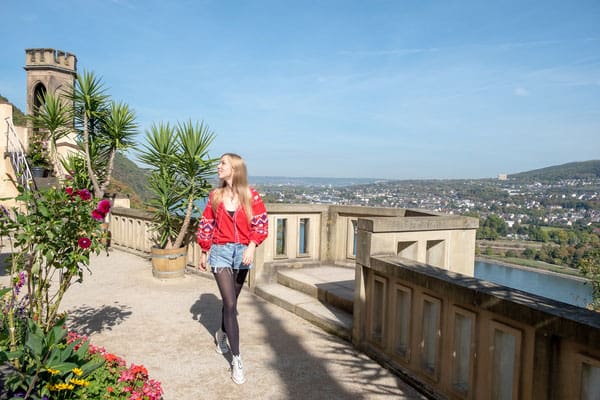 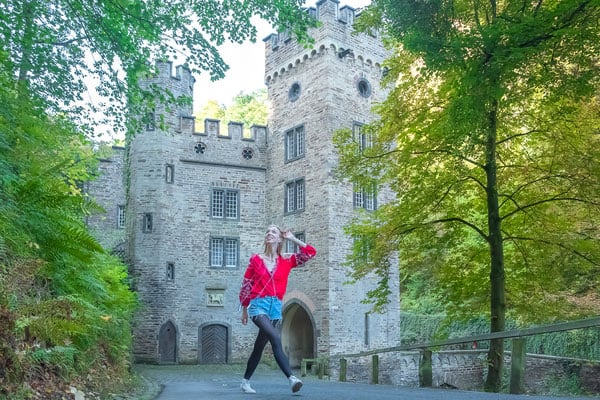 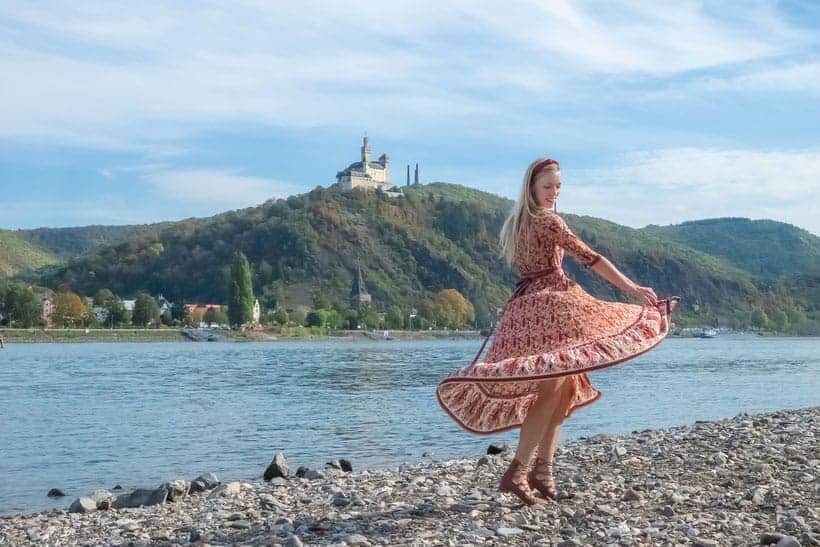 Although I didn’t visit Marksburg castle, I particularly liked the dramatic atmosphere around the castle. Whilst I was on the opposite river bank, I had the best view on one of the most well-preserved castles in the Rhine River Valley.

Towering above the of Braubach , the Marksburg is one of the principal sites of the Rhine Gorge UNESCO World Heritage Site. In opposite to other Rhine river castles, the fortress was used for protection rather than as a residence for royal families.

Guided visits cost 7€ and can be arranged here.

From B 42, in the direction of Rüdesheim or Koblenz, use the exit to Braubach and follow the signs to “Marksburg”. You will find a spacious parking site close to the castle. 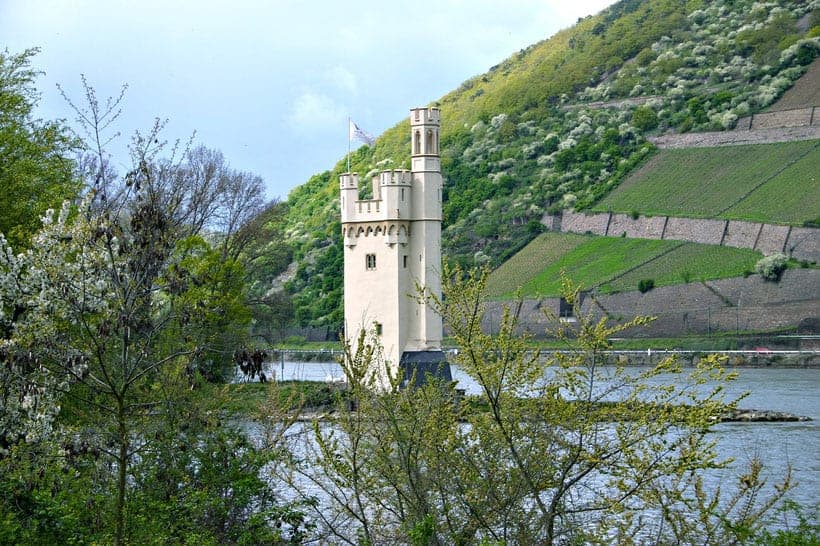 Bingen was not only home to one of the most remarkable women in the Middle Ages, Hildegard von Bingen, but also a perfect stop during your Rhine River Day cruise.

Surrounded by vineyards, Bingen is one of the larger towns on the Rhine river. Some of the must-sees in Bingen include the wooden crane and the Klopp castle who has been destroyed several times during the last centuries. From here you’ll enjoy beautiful views on the town and on the river. The castle site also hosts a restaurant.

The icon of Bingen is the Mouse Tower (Mäuseturm) shrouded in historic traditions and legends. Located on a small island in the Rhine River just outside Bingen, it makes for a nice photo opportunity from the river bank or a boat.

The legend says that the cruel archbishop of Mainz, locked up the peasants of the town in a barn and set it on fire. He got chased out of his castle and halfway across the river to the tower by an army of mice who ate him alive. 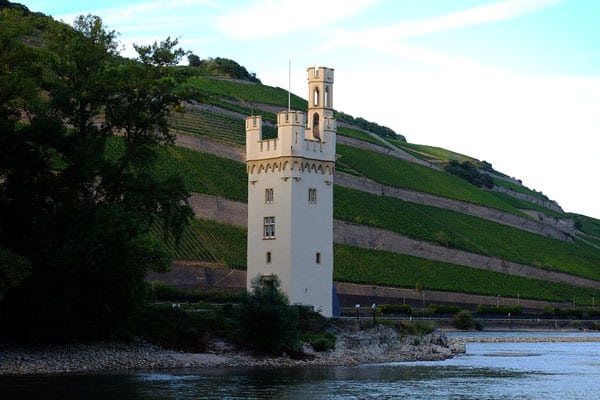 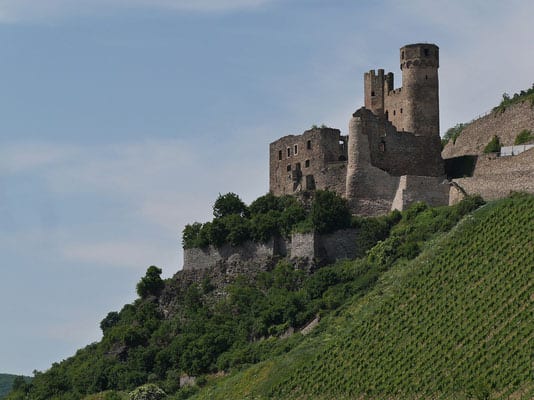 I hope some of these, admittedly very personal, highlights of my visit to the Middle Rhine River Valley in Germany could convince you to include the region in your travel plans.

Have you been in the Rhine River Valley, Germany? Did you enjoy it? I would love to hear about the things you loved (or loved less) in the comment form.

In order to get more information on tourism in Rhine River Valley, Germany, I recommend the site of the Romantic Rhine Tourism.

Disclaimer: I have been a guest of Romantischer Rhein Touristik. All my opinions, as always, are my own. This post contains affiliate links. In case you purchase one of the items, I’ll receive a small commission. The price remains the same for you.