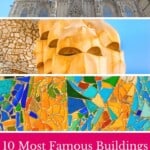 10 Most Famous Buildings in Barcelona 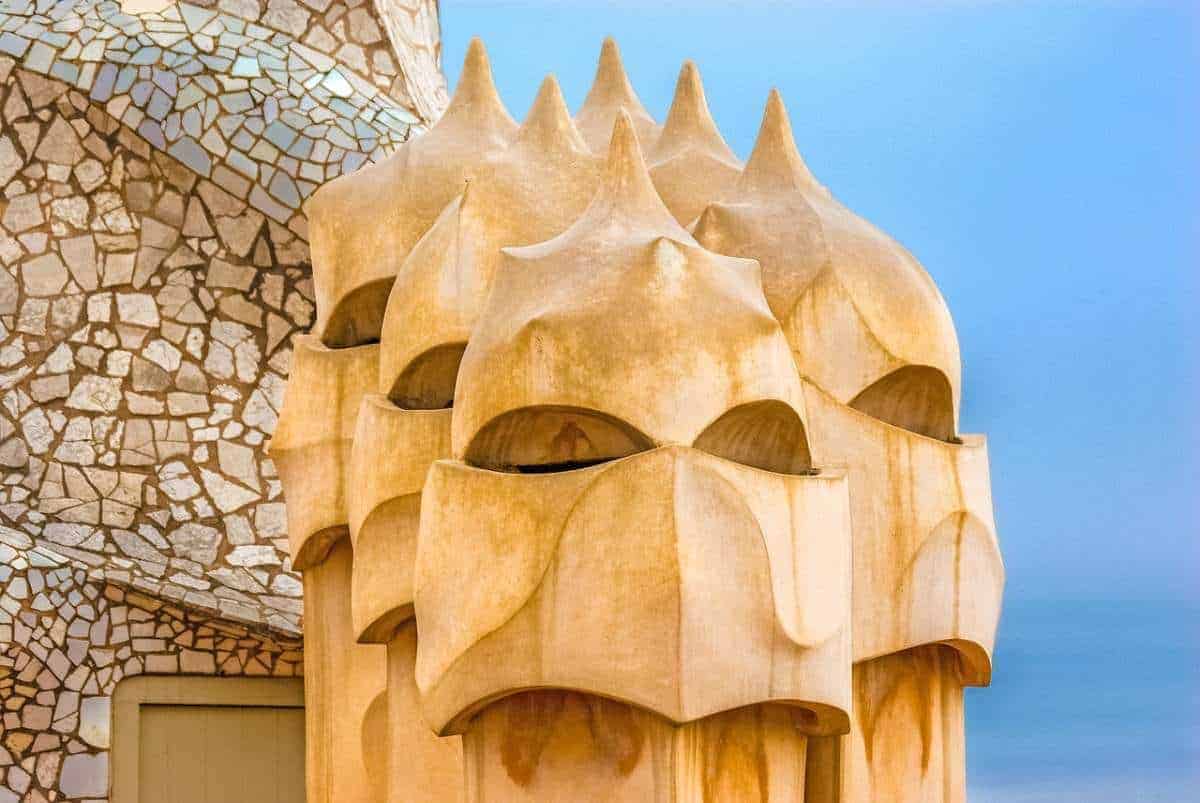 One of the most visited cities, Barcelona is home to some of the most famous buildings in the world. The capital of Spain’s Catalonia region has its own unique atmosphere with its fabulous Gothic architecture combined with later influences of the famous Catalan architect Antoni Gaudi.

Barcelona’s architecture with its twists and turns, will play with your imagination and amaze you many times during your trip. So let’s take a look at the 10 most famous buildings in Barcelona that should be on your list. 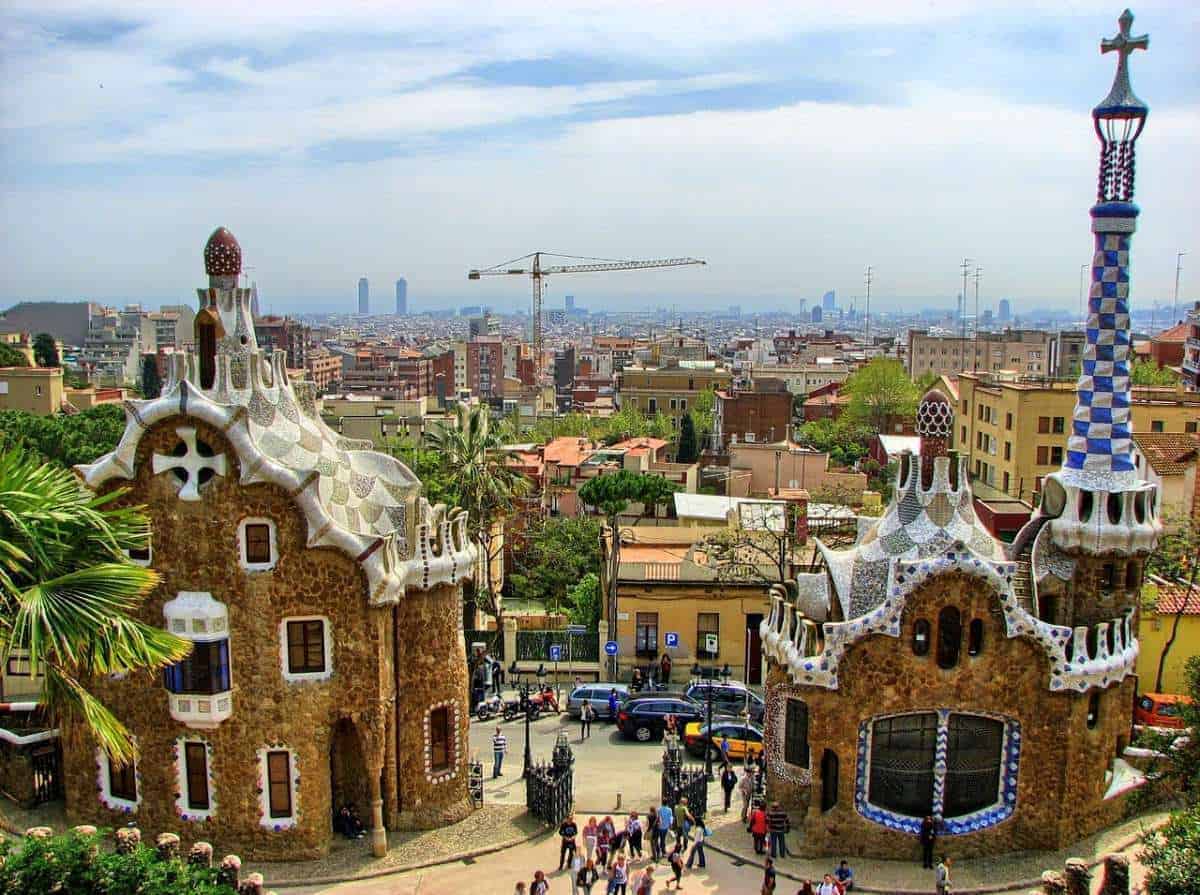 Park Guell is a sprawling venue composed of gardens and quirky architectural pieces located on Carmel Hill from which you get a breathtaking view of the entire Barcelona. One of the major works of Gaudi in Barcelona, it was originally intended as a residential park for Barcelona’s aristocrats, but eventually became one of Barcelona’s most famous landmarks.

While Park Guell is away from the center of Barcelona, it’s still located within the city limits. You can spend a lot of time wandering around this gem that features The Gaudi Museum, the entrance pavilion and an incredible panoramic view from the balcony.

If you are visiting during the peak tourist season which falls in late spring through early fall, you should book your tickets online to skip the crowds.

The Palau Güell is one of the prettiest buildings in Barcelona and thus very popular. It’s thus very important to book in advance as the entrance is limited. 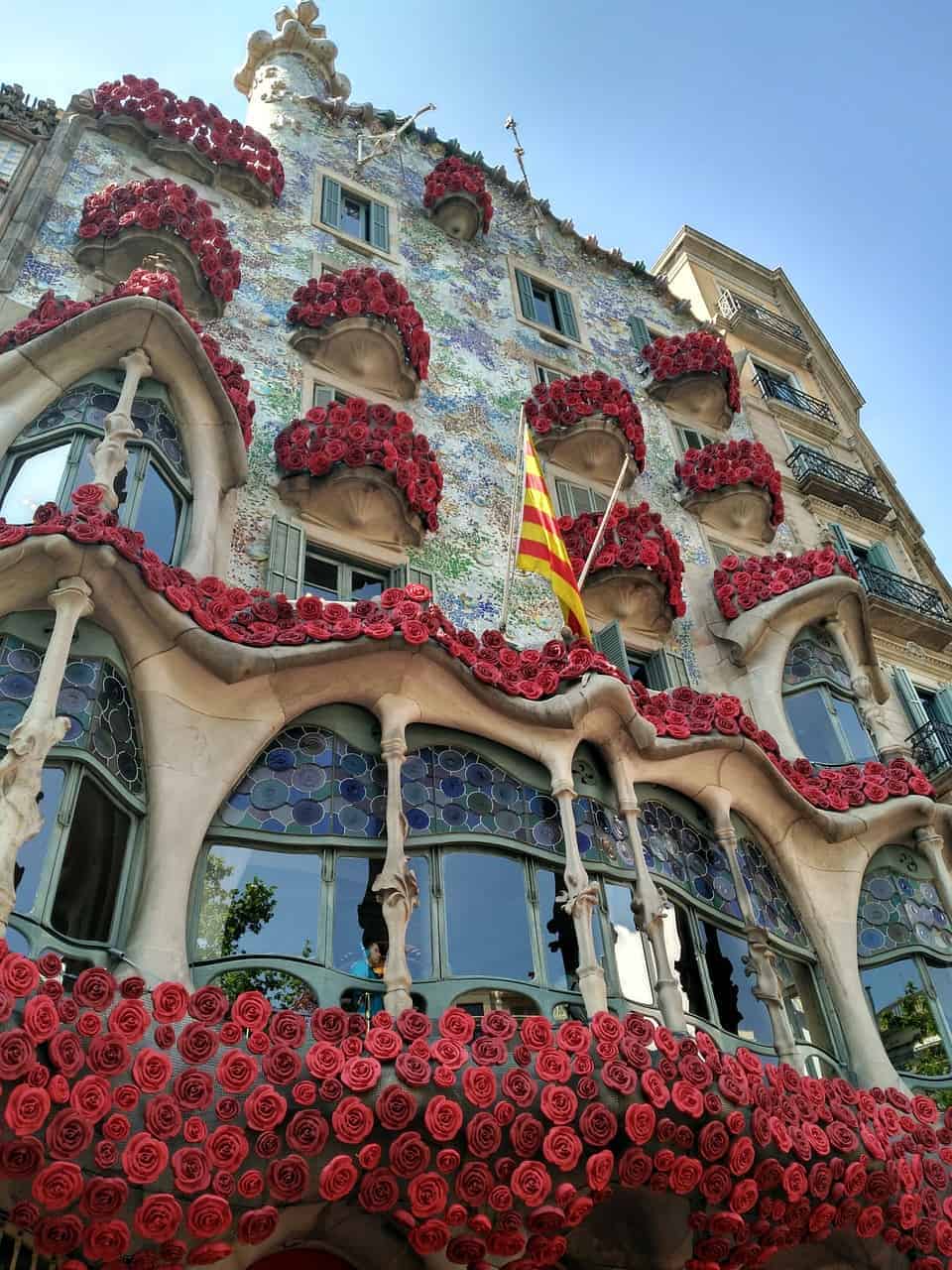 Located in the center of Barcelona, this building is another architectural jewel created by the Catalan modernist Antoni Gaudí. Nicknamed “The House of Bones” by locals, Casa Batlló is known for its elegant terraces, bright colors and unusual facade. Casa Batllo is one of the reasons why Barcelona is considered one of the most beautiful places in Spain.

Along with nearby Casa Amatller and Casa Leo Morera, Casa Battlo comprises a so-called “Block of Discord” – prominent modernist houses located on the same block.

If you are willing to pay for the entrance, I highly recommend taking some time to explore the inside with a guided audio tour. The major pet-peeve of many travelers is the long line at the entrance which can be avoided by buying tickets online and showing up early. 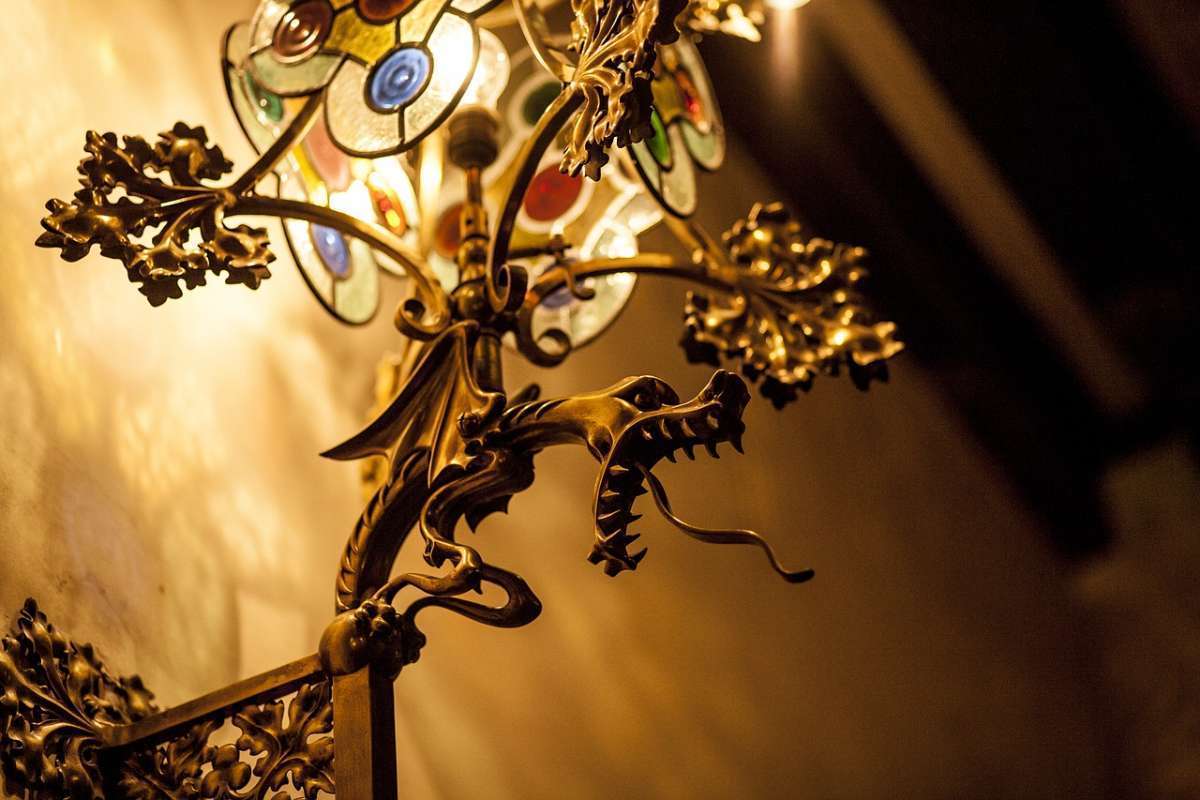 Right next to Casa Battlo you’ll find Casa Amatller, a Catalan modernistic building that is often ignored by tourists because of its more famous neighbor. The neo-gothic facade of the building probably will remind you of the Dutch architecture, and rightfully so, because it was inspired by the buildings in the Netherlands.

Take a guided tour inside the building and learn about the history of art in Barcelona.

Casa Amatller is one of the most famous Barcelona buildings. 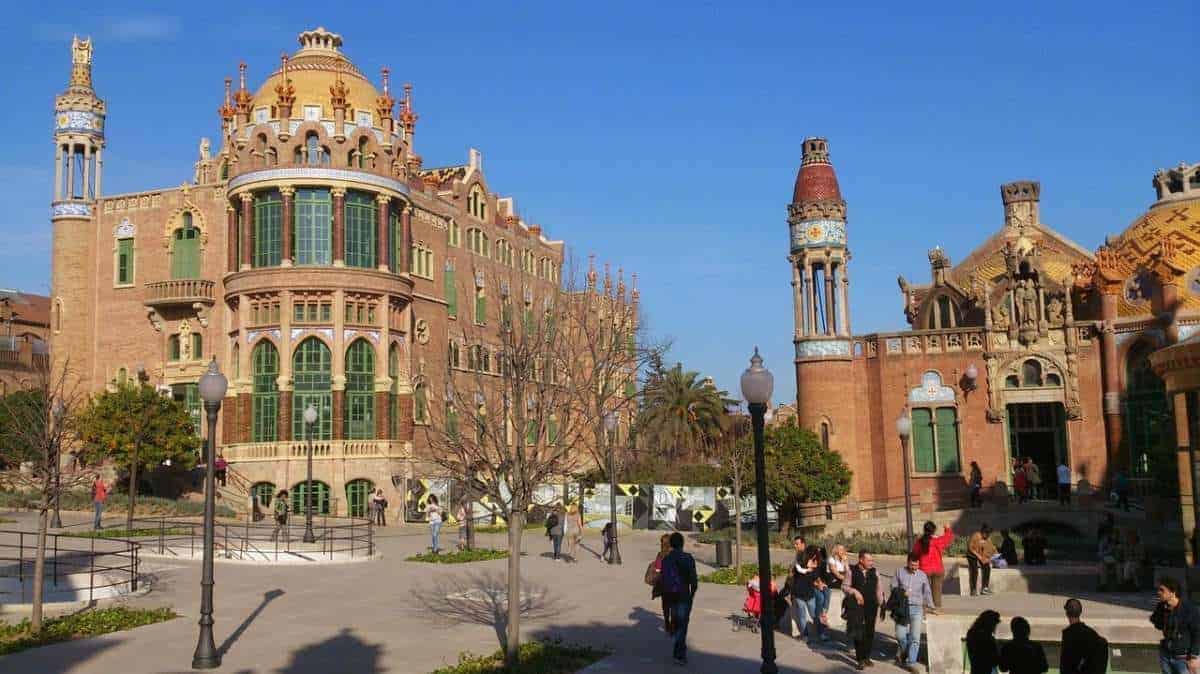 Along with Casa Battlo and Casa Amatller, Casa Lleo-Morera is one of the most grandiose modernist constructions in Barcelona. The design of the building and the details of the balconies are intricate and impressive.

Similar to Casa Amatller and Casa Battlo, you can purchase tickets online and take a guided tour of the building to learn about one of the geniuses of the Catalan modernism – Lluís Domènech i Montaner. 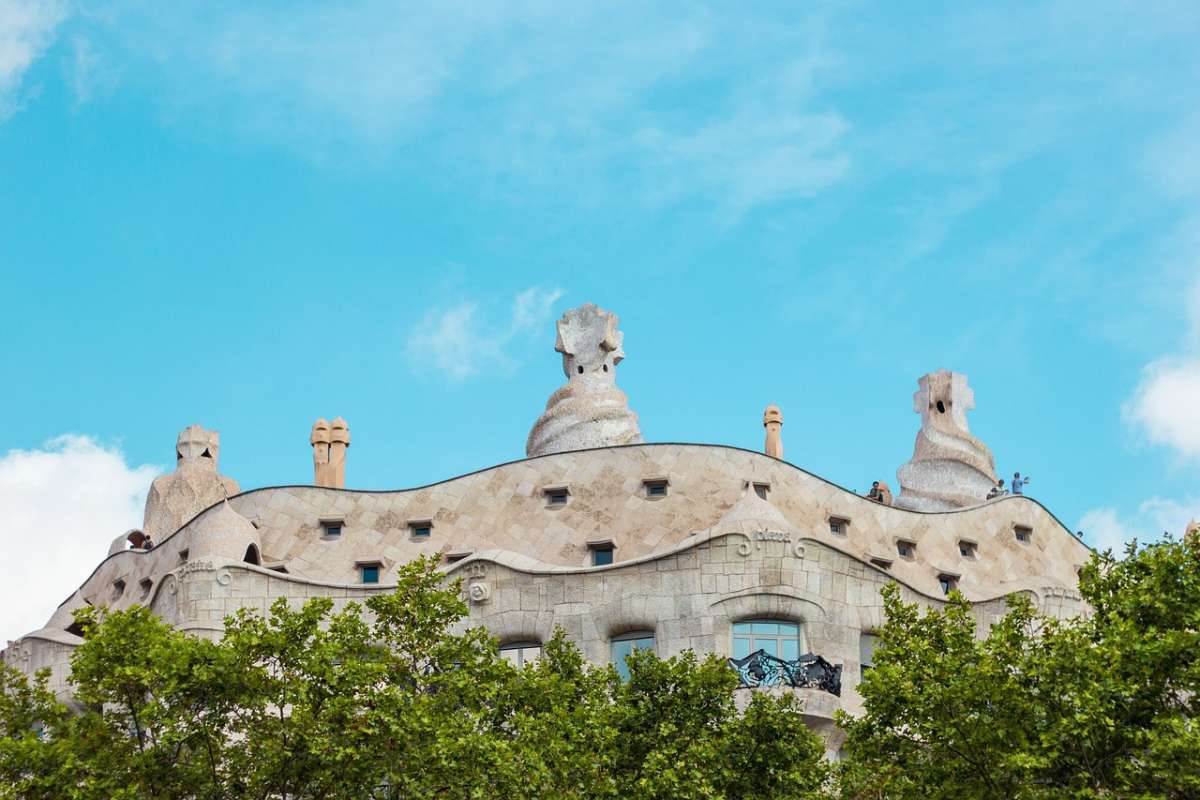 Case Milla is located only a few minutes away from Casa Batllo. Just like Casa Batllo, Casa Mila is nicknamed “The Quarry House” because its irregularly shaped facade resembles a quarry. The rooftop of Casa Mila is a major attraction thanks to the amazing city views.

To skip the long lines which are also typical for this place, I strongly recommend booking your tickets in advance.

Casa Mila is one of the masterpieces of Catalan art. 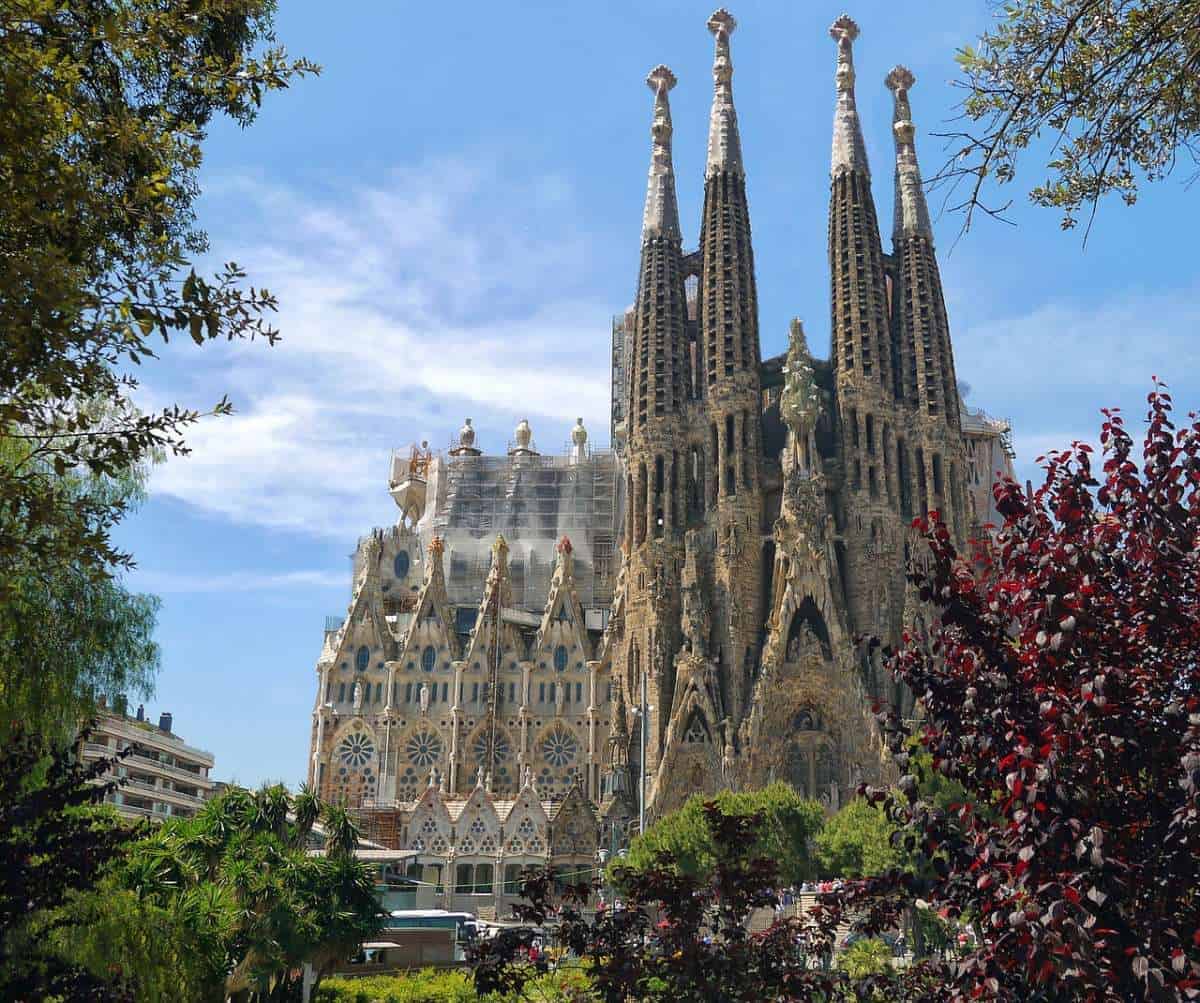 Gaudi’s masterpiece is probably the most photographed piece of architecture in the entire Barcelona. While there are countless interpretations of what Gaudi was trying to portray through his artwork, La Sagrada Familia is an indisputable testament to his unrelenting imagination and religious devotion.

Despite still being under construction, this Roman Catholic church draws huge numbers of tourists, so prepare to brave the crowds.

The main highlight of the interior of La Sagrada Familia are the columns that stretch toward the ceiling.

If you look closely, you will notice that the style of construction is somewhat different between the old and new parts of the church. This difference has created a lot of controversies, as some think that Gaudi would not have approved of the construction methods that are used to finish his most famous work.

This building can already be seen as UNESCO World Heritage. It is one of the most visited Gaudi buildings in Barcelona. The building is a must-do, even if you just have 48 hours in Barcelona. 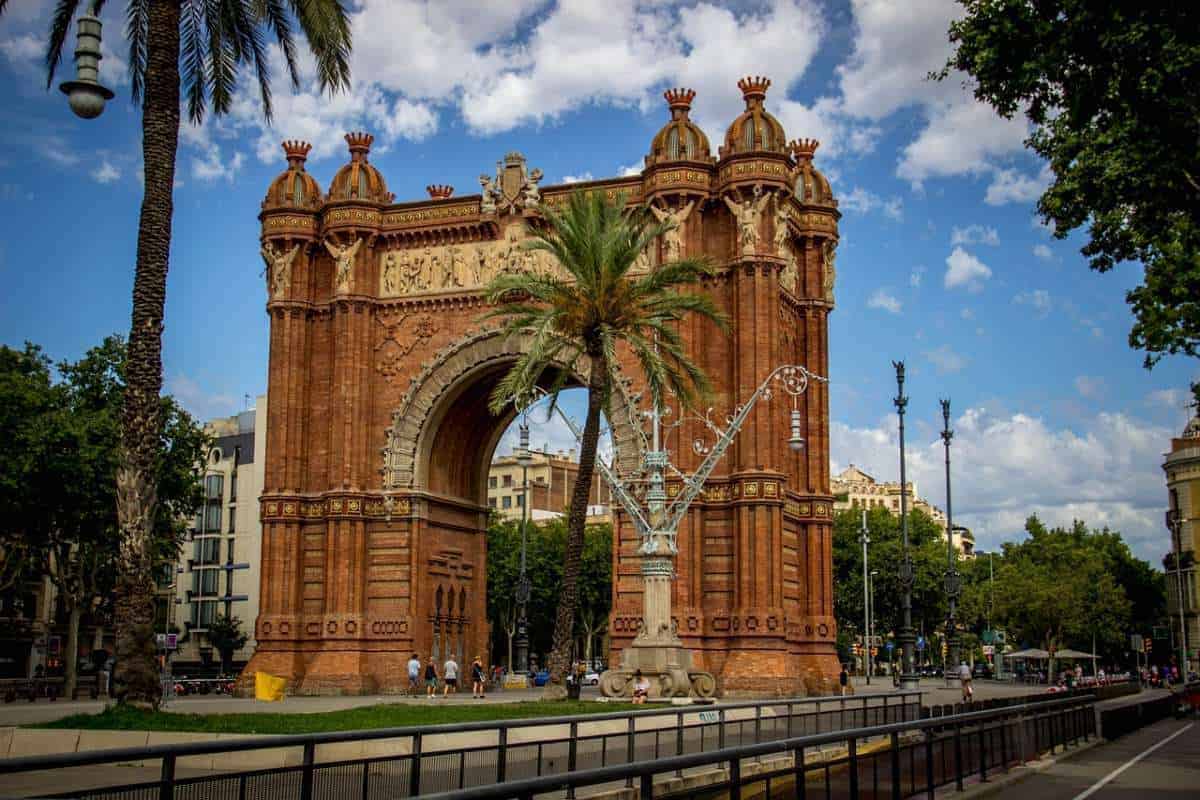 The Arc de Triompf is a red-brick triumphal arch that was built as the gateway to the fair in the Parc de la Ciutadella, but today it serves a purely decorative purpose.

One of the most famous monuments in Barcelona, the triumphal arch has numerous details and motifs that are definitely worth checking out. So, take a few minutes to walk down the palm-tree avenue and take a peek at this architectural marvel. 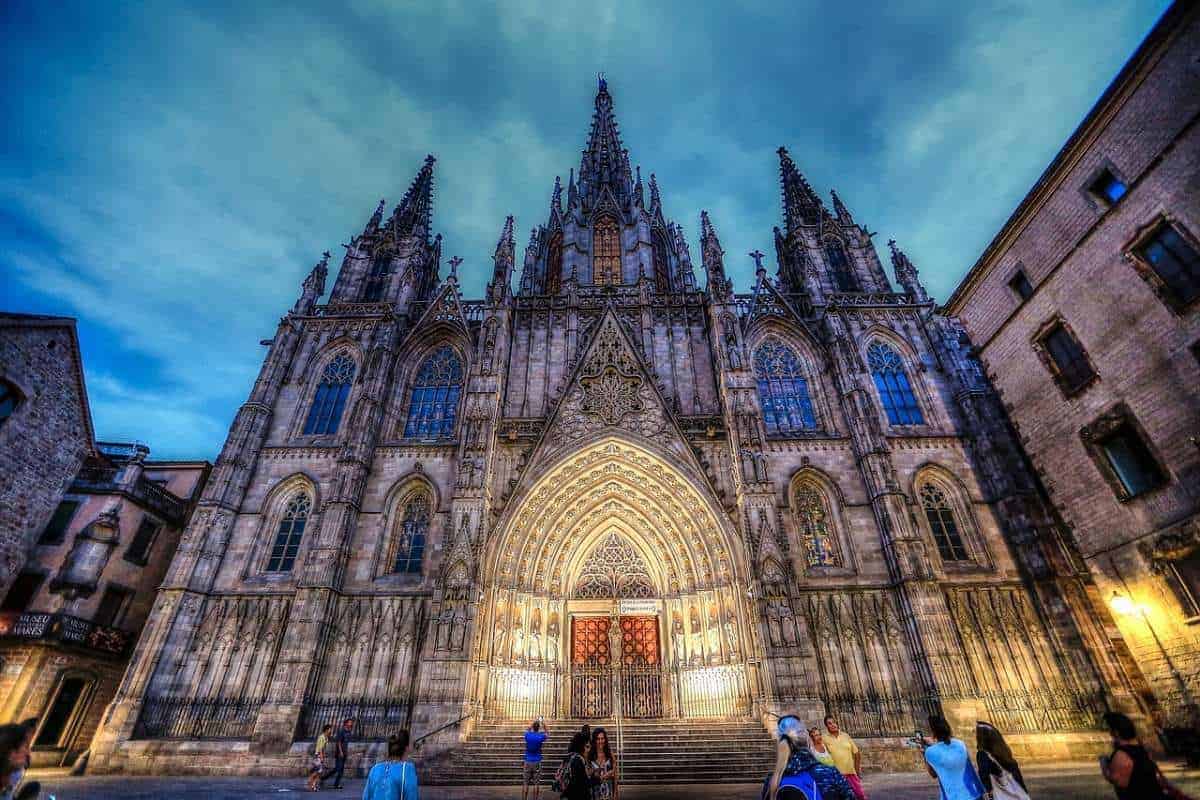 The Gothic Quarter is one of the most popular neighborhoods in Barcelona. Full of history, the Gothic Quarter of Barcelona is the gateway to the Old City. It has trendy bars, restaurants, and nightlife combined with centuries-old buildings and cathedrals. The Gothic Cathedral, a majestic 13-15th-century building is the major highlight of the area which shouldn’t be missed.

On top of it, the Gothic Quarter boasts several prominent buildings such as Sant Jaume Square and Church of Santa Maria del Pi. Other places located within the Gothic Quarter that are worth visiting are Plaça del Rei, home the Museum of History of Barcelona and Plaça Reial, a popular gathering place with a lot of restaurants and a lively atmosphere.

La Boqueria is a market well-known for its large assortment of products. Even though it’s technically located right on the border of the Gothic Quarter, you should take a walk around and breathe in the unique atmosphere of this historic place. 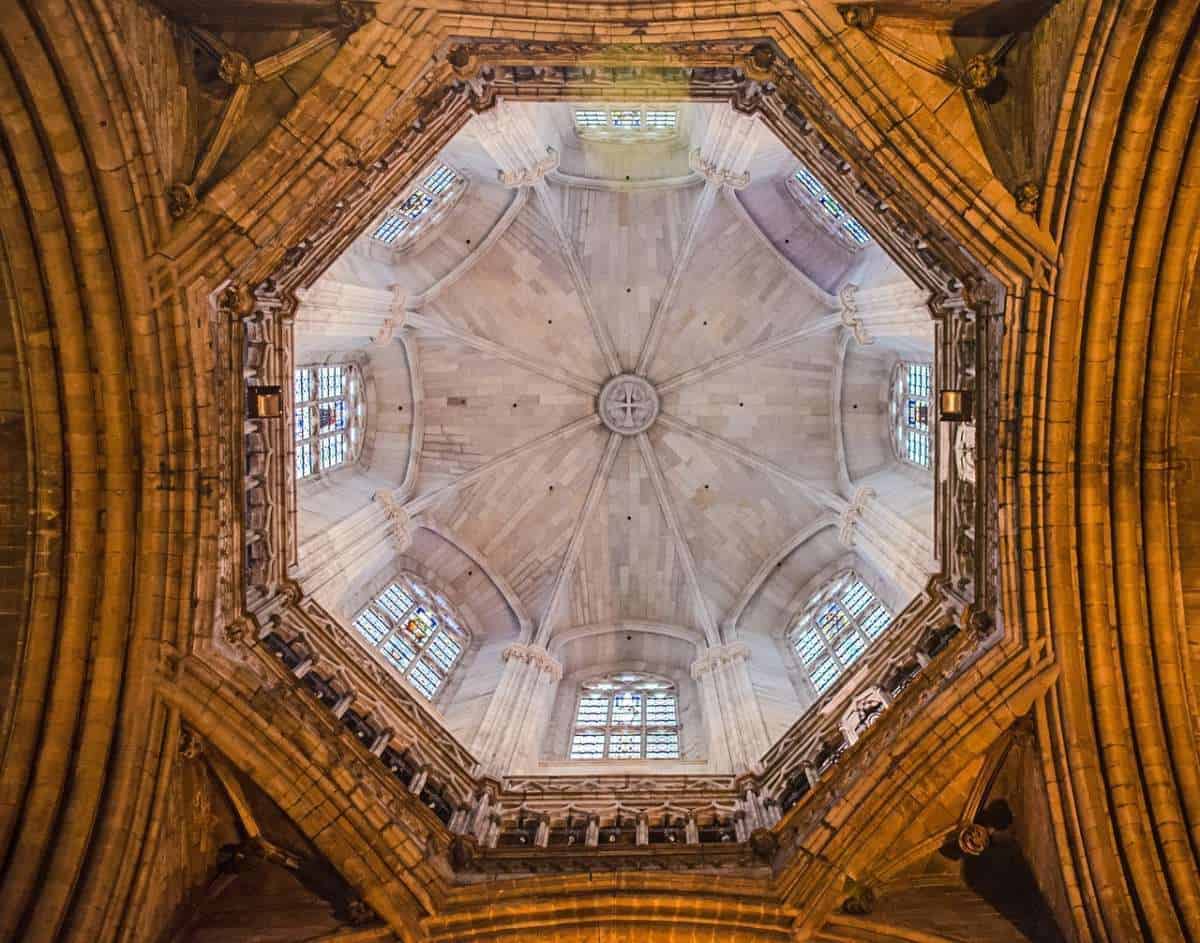 One of the best examples of the Catalan Gothic Style, Santa Maria Del Mar (Our Lady of the Sea) is located in the Ribera district of Barcelona. Completed in the 14th century, the church took over 50 years to be built.

Make sure to check out the inside of the church and take a guided tour to one of the rooftop terraces if you want to learn more about the history of the cathedral. The tour is available from May to October.

The church is known for its unique architectural style with a simple interior devoid of any imagery and stern-looking outside complete with an ornate nave.

I recommend you take this tour early morning before the venue gets crowded. This building is less known but is one of the reasons why Barcelona is considered one the top city breaks in Spain. 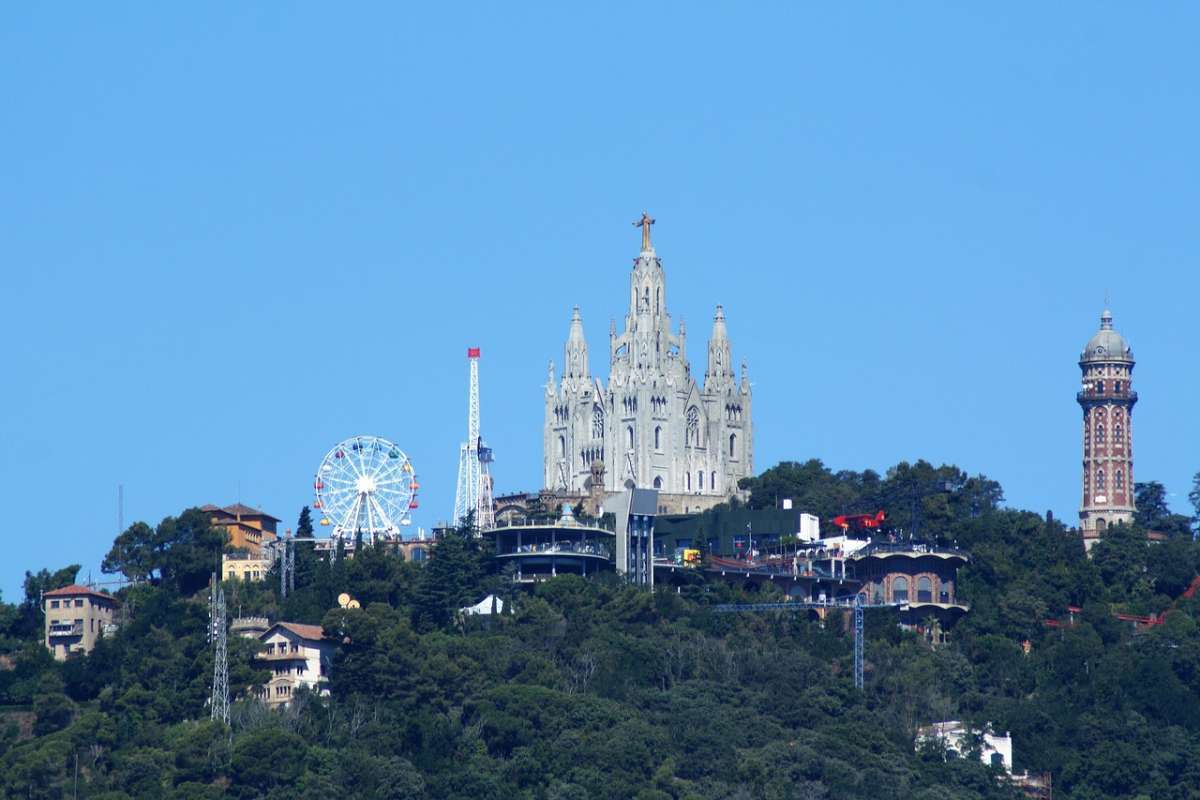 Tibidabo Cathedral or with its Temple Expiatori del Sagrat Cor ( Temple of the Sacred Heart of Jesus ) is a church on top of Mount Tibidabo. Climb up the stairs to the top of Tibidabo cathedral and you will be rewarded with an amazing panoramic view of Barcelona and more. While the cathedral’s entrance is free, you have to pay 2 euros for the elevator to get to the top. Book here your ticket to Tibidabo

The venue is accessible by public transport, including buses and trains.

Barcelona is also a great base to explore the Catalan countryside. Read more about a day trip to the best wineries near Barcelona

Read more about how to spend 48 hours in Barcelona 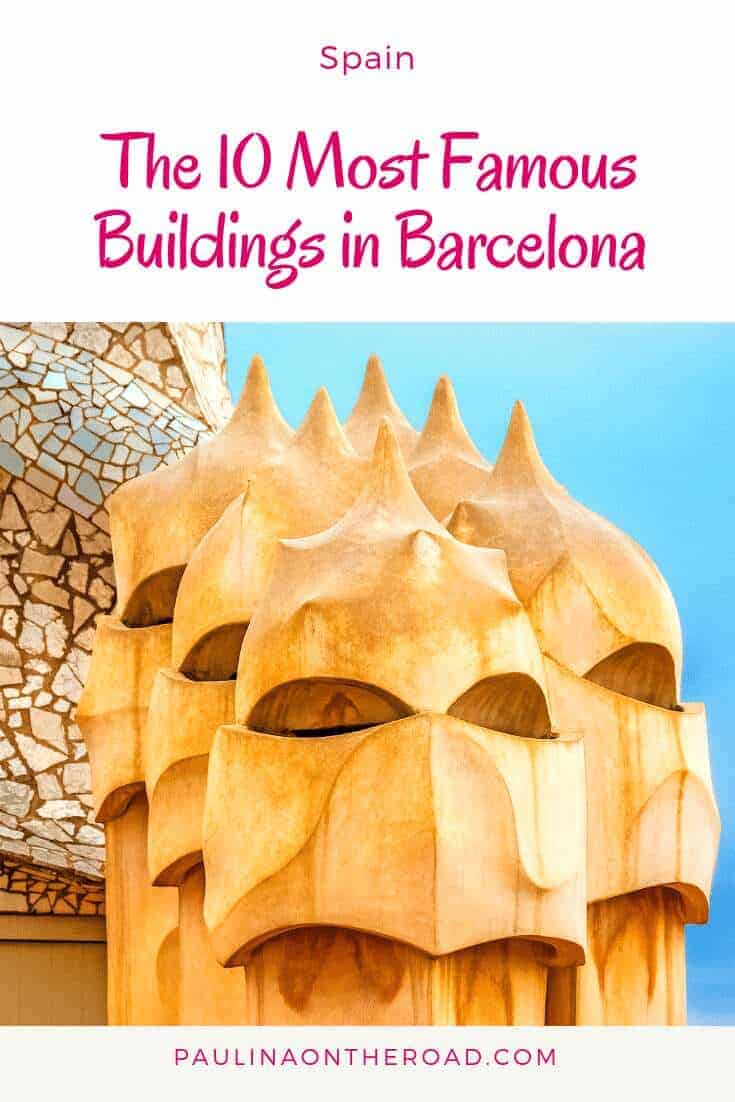 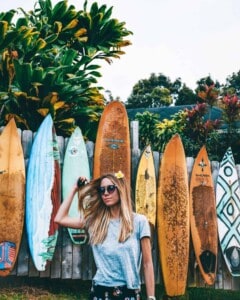 The Discovery Nut is a website about traveling the less discovered locations and encouraging others to get out of their comfort zone. Daria Bachmann has founded The Discovery Nut as she wanted to share her passion for traveling to the less known places. Through writing and videos that can be found on her website and YouTube channel. She hopes to inspire others to venture out into the world and discover new destinations. 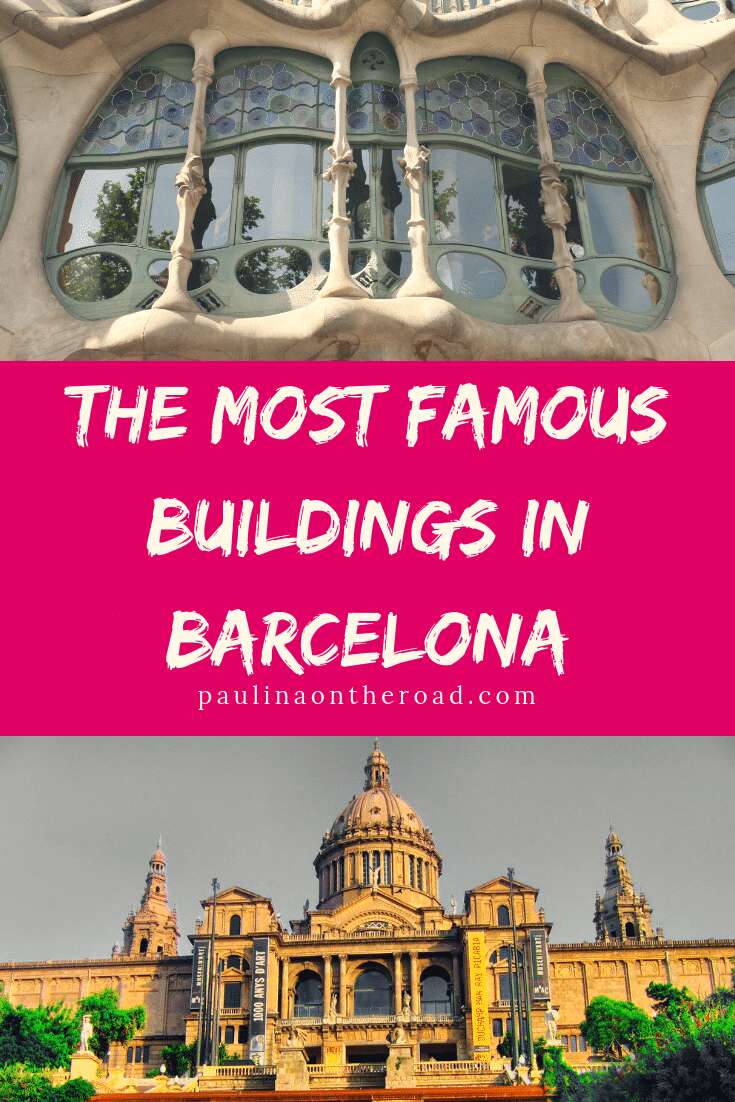 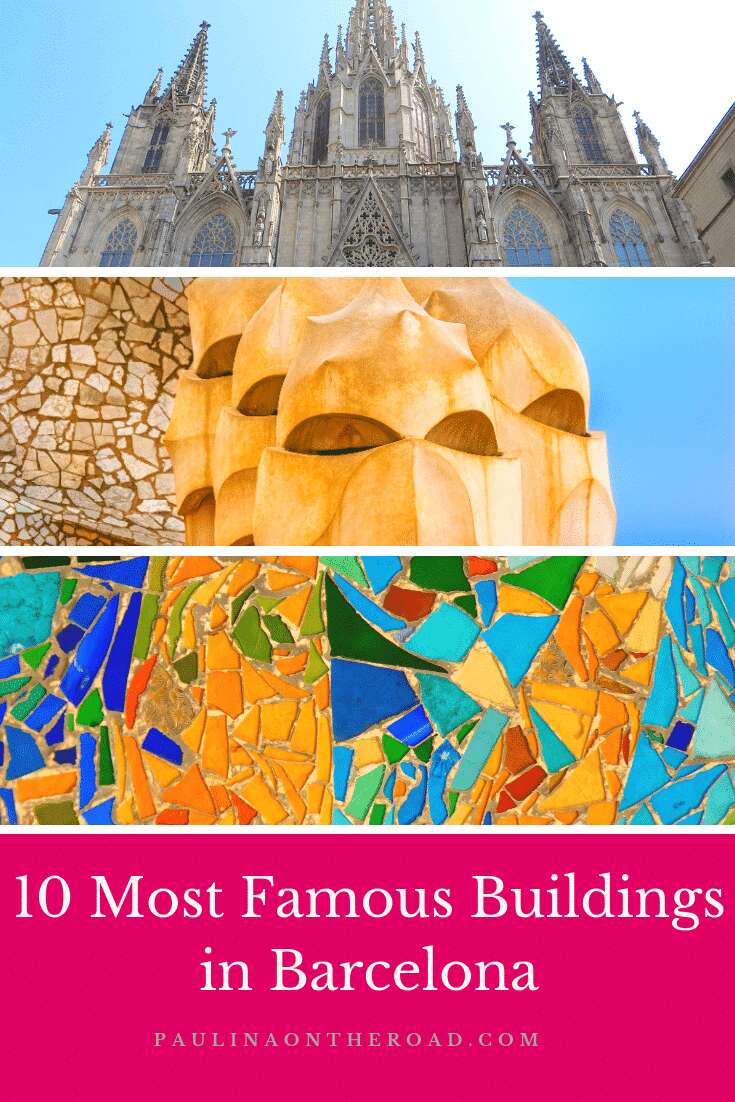 Previous Post: « BOM Food&Drinks in Bouillon: a Foodie Day Trip to Belgium
Next Post: How to spend 48 Hours in Barcelona »