One of Portugal’s two autonomous regions, the other being Madeira, the Azores, is an archipelago of volcanic islands 1,500 km (930 mi) west of Lisbon in the Atlantic Ocean.

For many years just a stopping-off place for transatlantic ocean crossings the Azores is fast becoming the latest hot tourist destination. 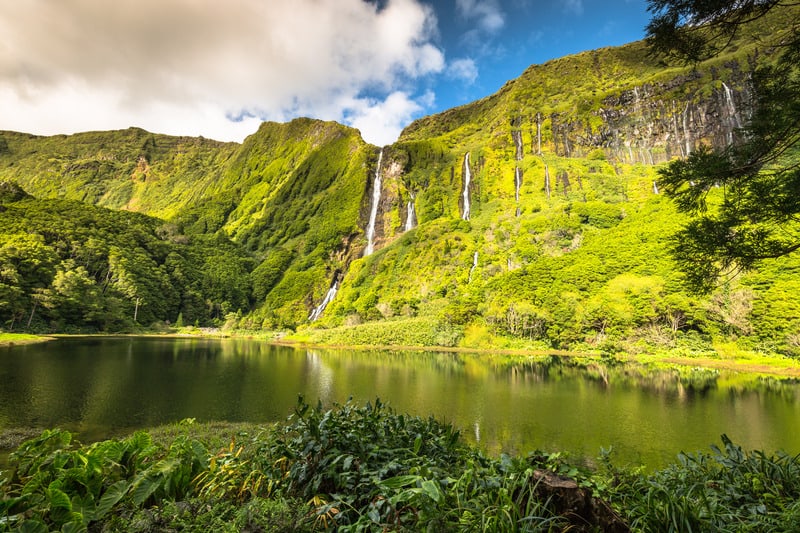 Often referred to as the Hawaii of the mid-Atlantic due to its excellent surfing, the Azores is also a world-class deep-sea fishing destination.

Blessed with an incredibly lush landscape of volcanic crater lakes, the Azores is home to two of Portugal’s UNESCO World Heritage Sites, the old town of Angra do Heroismo, and the vineyards of Pico on Terceira and the biospheres of Corvo, Flores, and Graciosa.

Firmly focused on sustainable tourism, the Azores now has regularly scheduled flights from the United States, Portugal, and Brazil.

Good to know before traveling to Azores

Official religion(s): 80% of the population is Roman Catholic, followed by non-religious citizens and other Christians.

Most famous places in the Azores

The Sete Cidades is an enormous caldera with twin sparkling lakes of a different color (blue and green). The scenery around this stunning natural wonder will have you believe that you have fallen into a fairy tale! – Check tours here

Located on the island Terceira, Angra do Heroismo was an obligatory stop for ships traveling between Europe and the New World. Today this legacy can be seen in the well-preserved buildings that date back to the 16th and 17th centuries.

Shaped like an almost perfect cone Mount Pico is the highest mountain in Portugal with a height of 2,351 meters ( 7,113 feet). From its peak, you are rewarded with views of all the other islands that make up the Azores. – Check tours here

In 1957 an underwater volcano erupted under the sea off the island of Faial, forcing half of its inhabitants to emigrate to the United States. Today an exhibition is dedicated to the 13-month-long eruption, which explains how the Azores came into being.

Similar to the way grapevines are cultured on the Canary Island of Lanzarote and Tenerife, the vineyards of Mount Pico utilize the volcanic soil stone walls to protect the vines from the wind. A vast grid of these stone walls covers nearly 2,000 acres of Mount Pico’s western slope.

Accommodation in the Azores

Of all the nine islands in the Azores archipelago, you decide to stay will depend very much on what you want to see and do.

Each island in the Azores has its unique features, but we recommend staying on São Miguel for the first time visitor as it is the one where you will arrive and has the most things to see and do.

Travelers on a shoestring budget will know all about hostels and their shared dormitory-style rooms and communal areas and kitchens.

The best hostel in São Miguel is City’s Hostel, located in Ponta Delgada within walking distance of all the main attractions. Prices for a bed in a shared room starting from $25, with private double rooms available from $50. Breakfast is included in both prices. – Check all hostels here

If you are looking for a bit more privacy than a hostel, stay at the 3-star Neat Hotel Avenida. Ideally located in the heart of town just three kilometers from the airport, the Neat Hotel Avenida offers every modern convenience. – Check rates here

Standard rooms with private bathrooms start from $100 per night.

The Azor Hotel overlooking the marina in Ponta Delgada is a modern hotel with a rooftop bar and swimming pool. All the contemporary furnished rooms come with private balconies with uninterrupted views across the harbor. Prices at the 5-star Azor Hotel start from $135 per night. – Check reviews here

If you are traveling as a family or with friends, Airbnb is an excellent option in the Azores.

Apartments and entire cottages can be rented for as little as $40 per night, leaving you money to travel around the islands and excursions such as whale watching.

Do I need a visa to travel to the Azores?

Fast-Track: Get your Azores Visa in advance

With the Azores being a part of Portugal, European Union citizens do not require a visa as Portugal is a signatory to the 1995 Schengen Agreement.

American, British, Canadian, Australian, and Japanese citizens do not require a visa but must have a passport valid for up to 90 days. While it is not a requirement proof or a return or onward ticket is advisable.

If you are not from any of the above countries, please contact the Portuguese Embassy in your home country to find out about visa requirements. Transit passengers from some nations may also need transit visas if passing through the Azores.

Best time to visit the Azores

With the Azores being in the middle of the Atlantic Ocean, they are described as having a maritime subtropical climate. This means that it has a mild year-round climate that never gets very hot or cold.

The best time to visit the Azores depends very much on what you plan to see and do. If you intend to lay on a beach, go swimming or partake in water sports, the summer months are best when the temperature averages between 25˚C to 30˚C. ( 77°F to 86°F).

For people interested in hiking, avoid the winter months where it can rain every other day. For the best chance of seeing whales visit during April and May when many whales pass close to the Azores during their annual migration.

For deep-sea fishing, the summer months of July, August, and September are best if you are looking to hook a marlin while bluefin tuna is abundant during the winter.

On the main island of São Miguel, you can get to all the main attractions and landmarks using the public bus system.

The island has three bus lines that all stop opposite the tourist information office in city doors square.

Taxis are widely available in Ponta Delgada but may be more difficult to find in some of the smaller villages. Another option for getting around is by renting a scooter or car. – Find the best car rentals here

Bikes and scooters are cheaper options, but with it raining frequently, you may get wet. This leaves renting a vehicle, which is probably your best bet as it does not tie you don’t to bus schedules.

If you plan on visiting other islands in the Azores other than São Miguel, it is not worth taking your rental car with you on the ferry.

Instead, arrange for a vehicle to be waiting for you when you arrive.

How to get to the Azores

With no ferry service from Portugal to the Azores, the best way to visit is by air. Azores Airlines and TAP Air Portugal both have direct flights from Portugal and the United States.

The main airport in the Azores is located in São Miguel, close to the capital Ponta Delgada.

How to get around in the Azores

While most of the islands in the Azores have a public transport system, it is geared more toward locals than tourists.

The easiest way to explore São Miguel is by renting a car. I usually find the best deals at Discover Cars. – Check deals here

Inter-island travel is achieved by flying, which is very expensive or by ferry.

All ferry services are operated by Atlantico Line who has all sailings and prices listed on its website.

Note: Not all ferries operate during the winter, and with the Azores being out in the Atlantic Ocean, some journeys can be quite choppy.

Best Food in the Azores

Based primarily on Portuguese staples, cooking in the Azores can be described as being rich, hearty, and peasant-based.

Focused mostly on seafood, stews, sweet desserts, and dairy products, the star of Azorean cuisine has to be its great cheeses.

Eating out in the Azores can be quite expensive because other than locally sourced products, everything has to be imported from Portugal. Lunch at a mid-range restaurant will cost between $10 and $20 depending upon what you order.

Try and avoid the main street eateries and instead scope out the restaurants and bars on the quieter side streets where locals go to eat.

Tip: Most hotels offer a free breakfast with the room’s price, so fill up on food during the morning and grab a bite to eat from a supermarket or sandwich shop for lunch.
Typical food in the Azores:

Polvo Guisado: Octopus stew is a favorite seafood dish from the island of Pico.
Bolo Lêvedo: Tasty English muffin-like bread.
São Jorge cheese: A semi-hard cheese with a crumbly texture similar to Cheddar.
Fried Mackerel: deep-fried whole everything is eaten except for the head and tail.
Cozido das Furnas: A traditional Azorean stew cooked underground in a volcanic steam chamber.

Best Things to do in the Azores for Outdoor travelers

Whale watching – Located far out in the Atlantic Ocean, the Azores are one of the best places to goal whale watching. Many whales are around year-round, but it is during the summer migration that things get spectacular. – Check tours here

Hike Mount Pico – Accessible year-round this 6.3 kilometers (4miles) lava hiking trail on the island of Pico allows visitors to climb the highest mountain in Portugal. The hike is not really for novices or anyone who is not fit and remember the weather can change quickly without any notice.

Mountain biking – Imagine mountain biking around a volcanic crater? This and all kinds of other exciting trails await in the Azores, with suitable trails for every taste and skill level.

Surfing – Thanks to mighty North Atlantic swells generated off Canada’s coast, the Azores and especially the island of São Miguel have some sweet surfing spots. For the best waves visit during winter and early spring.

Birdwatching – Home to two of the rarest bird species in Europe, the Azores bullfinch and the Monteiro’s storm petrel, The Azores has 30 types of nesting birds and is often visited by migratory birds that get blown off course.- Check all tours in Azores here

Latest posts about the Azores:

15 Things to do in Ponta Delgada for Sustainable Travelers

10 Best Azores Hiking Trails You Should Do!

A Guide to the Best Hiking Trails in the Azores, Portugal The Azores is an autonomous region of Portugal comprising nine volcanic islands in the …

Read More about 10 Best Azores Hiking Trails You Should Do!

7 Fun Things To Do in São Miguel, Azores

The Azores might be Portugal’s best-kept secret. Until recently only a few flights connected the archipelago to the European mainland. Now, with low-cost airlines opening …

Read More about 7 Fun Things To Do in São Miguel, Azores

The beautiful island of Sao Miguel, Azores has plenty of things to do. And after spending some time here, you might be up for less …