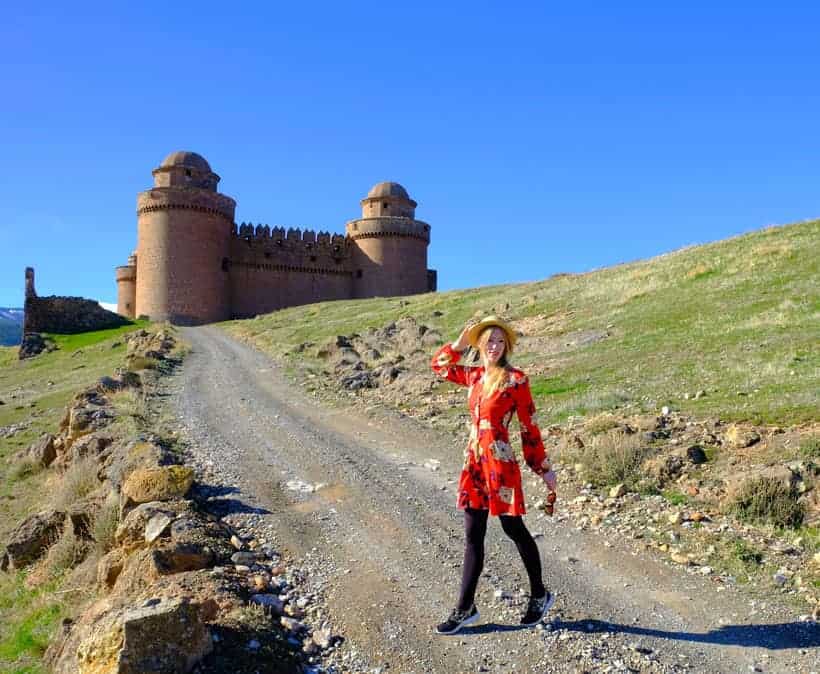 Occupying the very bottom of the country, Andalucia is the epitome of everyone’s notion of Spain.

With hundreds of miles of both Mediterranean and Atlantic coastline, Andalucia is a favorite with northern Europeans looking to soak up some summer sun.

Andalucia is the fiesta land where beautiful women put on their colorful flamenco dresses and young boys dream of becoming a famous bullfighter.

A land immortalized in operas and vividly depicted in 19th-century art.

While Seville, Granada, Malaga, and Cordoba all have their cosmopolitan shopping and nightlife, it is in the white hilltop villages where Andalucia’s heart and soul reside.

Avoid tourist traps with the “Spain Like a Local” itinerary:

Make the most of your time with the fully customizable Spain travel itinerary for 9,99€ only! – Get it here

Set against the backdrop of the Sierra Nevada mountains, the Alhambra Palace and its beautiful Generalife gardens were the seat of Granada’s Nasrid emirs. A love letter to Moorish culture, the Alhambra is one of Spain’s most visited places and requires booking weeks in advance. – Book tickets here

Containing a mixture of Christian and Mudéjar architecture, the Real Alcázar in Seville is spectacularly beautiful in every way. In fact, so beautiful that it was the setting for the fictional land of Dorne in HBO’s popular Game of Thrones. – Book tickets here

Once the great Mosque of Cordoba, the Mezquita is a place of great beauty and serenity despite the crowds of people who gaze at its glory. At the time of its construction, Cordoba was one of Europe’s most enlightened cities and a place where Muslims, Christians, and Jews lived in harmony. – Book tickets here

Built between 1434 and 1517 on what was once a mosque, Seville’s cathedral and its 104meter ( 341 feet)-high bell tower is a veritable treasure trove of art with works from Murillo, Goya, and Zurbarán. Constructed during Spain’s “Golden Age” when rich with treasures brought back from the Americas, the cathedral is also home to the tomb of Christopher Columbus. – Check tickets here

Sitting atop El Tajo gorge with a spectacular stone bridge, Ronda is the largest of Andalucia’s Pueblo Blancos (White Villages) and has a history dating back to the Romans. Regarded as being the birthplace of bullfighting, Ronda was a favorite of Ernest Hemingway and Orson Wells.

For people on a tight budget, finding a decent place to stay can often be a problem. This is not the case in Andalucia, where every city has one or more hostal offering beds for the night. Do your research on websites like TripAdvisor before selecting a hostel with summertime prices starting from around 15€ per night. Camping is also a great option, with many campgrounds along the coast offering tent pitches for around 20€ per night. – Check hostels here

You will find the big-name hotel chains like Marriot and Hilton offering luxury business accommodation in every Andalusian city. Upmarket boutique hotels, often in historic buildings, are another option you may want to consider. – Check hotels here

If you are traveling as a family or with friends, you might want to consider renting an apartment. Another option is to rent a private villa with a swimming pool in the countryside. Home-sharing websites like Airbnb are a great place to look. – Check AirBnBs here

So if you are looking to visit historical sites like the Alhambra and the Real Alcázar, you are best to visit during the spring and fall to avoid the crowds.

Spain is one of the top nations in the world when it comes to infrastructure with an extensive motorway network and high-speed rail connections.

To get to more out-of-the-way places, you can travel by bus or rent a car. As for public transport, all of Andalusia’s towns and cities have public buses plus metered taxis are available too.

Flight: While both Seville and Granada and Jerez de la Frontera have airports, most people visiting Andalucia arrive at Málaga-Costa del Sol Airport (AGP). If you are traveling from North America or further afield, you will need to change planes in Madrid or Barcelona. From Madrid, it is possible to visit Andalusian cities by high-speed rail. – Check flights here

Train: If you plan to visit mostly the cities while in Andalucia, the train is an excellent way to get around. – Get tickets here

Car: Having a car allows you to move around at a pace that suits you but is not necessary for traveling around Andalucia. It can even be a hindrance in cities where parking is at a premium. – Check car rentals here

Car: Andalucia has an excellent road network, but its cities were built long before the invention of motor vehicles making it often difficult to find a place to park. The cities also tend to have many one-way systems and multi-lane roundabouts (circles) that make driving tricky. – Check car rentals here

Bus: Taking the bus is the best way to get around while in Andalusian cities and towns. Once you work out the different routes and what number bus to take, it is straightforward. – Get tickets here

In Andalucia and the rest of Spain, for that matter, people have a very light breakfast that consists of coffee and toasted bread with olive oil, jam, or butter.

Lunch is the main meal of the day and is always eaten at 14:00. In the evening, Spaniards go out late and don’t have anything to eat until around 22:00.

Food in the evening generally consists of bite-sized Spanish snacks called tapas that they enjoy with drinks.

Food in Andalucia is always fresh, with seafood being a big favorite near to the coast. Inland in places like Cordoba, you can expect to find more meat dishes.

A delicacy around the world, Spain’s famous cured ham comes it two distinct varieties. The least expensive is called Jamón Serrano, while the most costly Jamón Iberico comes from black pigs fed on acorns.

Located near Granada, the Sierra Nevada ski resort is the most southerly in Europe with a season that can last into late April. You can go for a swim after lunch during spring as its only an hour’s drive from the Mediterranean Sea. – Check tours here

Rent a sea kayak on Burriana beach in Nerja and paddle your way along the cliffs to Maro. On the way, you will discover secret coves, waterfalls, and beaches only accessible from the sea. The entire area is also a protected Marine Reserve making ideal for snorkeling. – Check tours here

Covering 543 km2 (209.65 sq mi), the Doñana National Park is an important wetland and stopping off point for birds migrating between Europe and Africa. The Park is also home to the endangered Iberian Lynx. – Check tours here

The Cabo de Gata-Níjar Natural Park is the largest coastal protected area in Spain with a wild and isolated landscape containing some of Europe’s oldest geological features. Today the Cabo de Gata is a great place for people looking to have an unspoiled beach vacation. – Check tours here

Discovered in 1959 by a group of boys out hunting bats the Nerja Caves are one of the most visited attractions in Spain and contain the world’s largest stalactite. The caves stretch for nearly 5 kilometres (3.1 mi) and have provided an insight into the Neanderthals. – Check tours here

Jerez de la Frontera is not only the home of the  Royal Andalusian School of Equestrian Art, but it is also the center of Spain’s horse culture. After a visit to see the performing horses go horse riding through the countryside on these magnificent beasts. – Check tours here

My Favourite Things to do in Cadiz

The fabulous Spanish city of Cadiz in Andalusia truly offers something for everyone. Whether you want to explore stunning beaches, eat delicious seafood, or discover …

Read More about My Favourite Things to do in Cadiz

Top 10 Things To Do in Seville – an Illustrated Walk

Seville is intoxicating, from the moment you arrive. There’s a palpable sense of rich cultural heritage and beauty attached to the city, the result of …

Spanish Ferias: How to Rock Despite Being ‘Guiri’!

It’s a dream of many Spain lovers to assist to a typical Spanish feria (fair)! There are only a few places where you can …

Read More about Spanish Ferias: How to Rock Despite Being ‘Guiri’!

A Day Trip from Seville to Carmona, Spain

Carmona, only 30 minutes away from Seville, impresses with a manifold history. Stronghold during the time of Julius Caesar, occupied by the …

Read More about A Day Trip from Seville to Carmona, Spain